Also known as the Monkey Terrier Dog, the Affenpinscher is a small dog breed with unusual physical features earning him the nickname black devil. Developed to hunt down vermin, this fearless dog worked his way into people’s hearts and is a popular but rare toy breed. 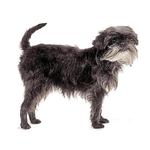 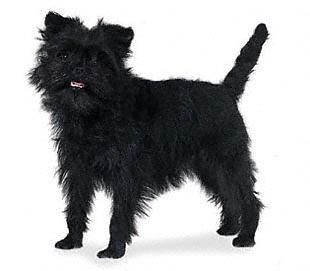 He got his name from “affen”, German for monkey and “pinscher”, German for a terrier. The dog worked throughout Central Europe as a ratter in farmhouses, stables and shops.

This breed’s predecessors are believed to be the Brussels Griffon, Pugs, smooth-coated German Pinschers, German Silky Pinscher and Miniature Schnauzer.

The original dog was larger but was bred to a smaller size by a breeder in Lubeck, Germany. These smaller intelligent Affenpinschers made excellent companion dogs for the ladies.

In 1902 The Berlin Lapdog Club published a breed standard for the Affenpinscher and was finalized in 1913. This standard was adopted by the American Kennel Club in 1936.

Like other breeds, World War II affected the breeding of the Affenpinscher and was only revived in the 1950s.

Even though this dog gained celebrity status by winning the Toy Group at the 2002 Westminster Kennel Club Show, the Affenpinscher is rare.

It’s clear why the Affenpinscher is called the black devil. He has a shaggy appearance with a monkey-like facial expression.

He has a sturdy compact body with a square appearance. He has a slight bite undershot with a short muzzle. He has a straight and level topline.

His tail is usually set high and curved gently over the back when walking. Some owners maintain a docked tail.

The Affenpinscher’s wiry coat is thick and rough and feels harsh to the touch. It grows shorter around the tail and rump and longer on the head, chest, tummy and limbs.

The long fur on the neck, head and shoulders looks like a cape.

Red Affenpinschers can have white, brown or black hair mixed in the coat as well as tan furnishings. Black Affenpinschers might have silver or white hair blended into the coat.

European Affenpinschers are always black and may have a little greying.

The Affen has a clownish charm is affectionate, curious and likes to entertain his people. He is fearless, bold and alert, making him an excellent watchdog.

He doesn’t know he is a small dog and won’t cower when confronted by a larger dog. He gets along well with cats and dogs that he has been raised with but should be protected from his ego.

His love for adventure and adjustable nature makes him a good travelling companion.

Sensitive and gentle, this small dog is not tolerant of any aggressive behaviour. Children will want to hug and hold this cute little dog and the Affen prefers his freedom and personal space respected.

Being chased, hit or any unwanted embraces will be met by a snapping or growling dog making this breed is best suited for grownups.

The Affenpinscher is smart, eager to please and a quick learner. He has a mind of his own and requires early and consistent use of positive reinforcement training techniques.

This dog should be exposed to different experiences and animals to live up to his potential.

He can be taught to compete in obedience and agility competitions. His gentle and entertaining nature makes him the ideal therapy dog.

As a toy dog, this breed is challenging to housetrain. Using pads and crate training will help to avoid accidents in the home.

The Affenpinscher is moderately active and doesn’t need a lot of exercise. Half an hour of play or a short brisk walk every day is sufficient.

The recommended daily amount of dog food is dependent on the Affen’s size, age, build, metabolism and level of activity.

As a house dog, he should keep to a regular meal schedule of high-quality dog food that provides complete nutritive value. Avoid feeding table scraps and limit the number of treats to avoid excess weight gain.

Coat care for the Affen requires regular brushing with a slicker brush and metal comb. To maintain the distinct dishevelled but neat wiry coat requires patience and persistence.

Any tangled hair can be broken using the fingers after spraying with a fur detangling solution to avoid damage to the coat.

Daily dental hygiene is important because this breed is predisposed to periodontal disease. The teeth should be brushed every day using a vet-approved dog toothbrush and toothpaste.

The Affen should have short neatly clipped nails to keep from scratching, slipping and falling. Using a nail trimmer once or twice a month will keep his paws in good condition.

Grooming the Affen offers an opportunity to check the dog for any physical signs of infection or disease. Look out for sores, rashes, redness, inflammation, bad odour, discharge or tenderness.

Because of his excitable nature, when on guard duty he can be loud and all the neighbours will know that there is someone at your front entrance.

The Affen is considered a hypoallergenic dog.

He is a full-time housedog that can live comfortably in an apartment or house with a fully fenced yard.

As a trained ratter, this dog shouldn’t be housed in a home with rodents that roam freely.

Some Affens can develop respiratory problems in hot weather and should avoid walking or playing outside on hot days.

The Affenpinscher is generally healthy but is prone to health conditions like:

The Affenpinscher has a life span of 11 to 14 years.

The Affenpinscher is a loving, loyal and protective small dog. This rare breed is not recommended for homes with children but is a wonderful companion for anyone looking for an affectionate housedog.

Here at All The Small Dog Breeds, we are passionate about our furry friends. We have compiled small dog breed descriptions to guide new and existing dog parents to find the ideal match for their home.