Fondly known as the Eskie, the American Eskimo Dog is a Nordic small dog breed that belongs to the Spitz family. He has a beautiful fluffy coat and a loveable personality that makes him a captivating companion. 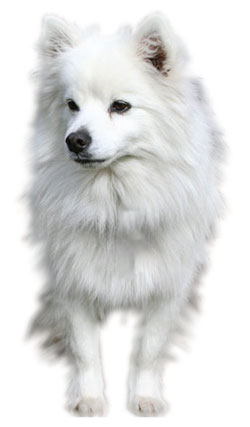 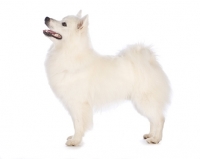 The American Eskimo Dog is believed to have originated from Germany and his ancestry comes from the German Spitz, Keeshonden and large white Pomeranian.

German immigrants brought these white Spitz dogs into the United States. After World War I, to show patriotism, the dogs were named American Spitz.

In the travelling circus acts, the American Spitz became well known for his dazzling white coat and amazing showmanship. American Spitz dogs could be seen walking the tightrope and puppies were sold after the shows.

Some believed that after World War II, the American Spitz was crossed with the imported Japanese Spitz.

In 1917 the American United Kennel Club renamed the American Spitz to the American Eskimo Dog. This breed is not a sled dog and it is not clear why they chose this name.

The Eskie has a fox-like face and small pricked ears like other Spitz-type dogs. He closely resembles the Samoyed but is smaller and lighter in weight.

This dog’s body is strong, compact and muscular. He moves with a confident gait.

He has a black nose and sweet facial expression that stand out against his thick white coat.

The Eskie has a fluffy pure white or white and cream coat. The undercoat is dense and the top coat has longer straight fur.

He has a distinct ruff around his chest and shoulders, well-feathered legs and plumed tail.

The American Eskimo Dog is lively, outgoing and friendly. He is charming and devoted to his owners.

The Eskie is cheerful and affectionate. He loves to participate in family activities and be the centre of attention.

High spirited and sensitive, this small dog responds to his owner’s emotions. He understands human tones and words.

He thinks he is a big dog and will bark when he sees strangers coming and going, making him an excellent watchdog.

Affectionate with everyone, the Eskie gets along well with children of all ages, cats and dogs. He might chase after birds and small mammals.

The Eskie is highly intelligent and easily trainable. He has a talent for problem-solving. He enjoys and excels in dog sports like obedience training, agility and conformation.

Once a popular circus performer, this dog learns quickly and will enjoy entertaining his family with amazing tricks. He thrives on structured activities instead of letting him run around aimlessly.

This breed has an independent streak and needs puppy training classes to help him grow into a well-mannered dog.

The American Eskimo Dog is energetic and loves to play for hours. He needs a lot of regular exercise and can be destructive in the home without it.

This breed loves to play in the snow and water. His double coat protects him from cold weather and helps to keep him cool on warm days.

It is important to make sure this dog doesn’t become overweight, especially in his senior years. His food intake depends on his size, age, metabolism and level of activity.

Even though his coat is light coloured, it is easy to keep it looking clean. His fur contains natural oil that allows for dirt and debris to be easily brushed out.

When the coat is filthy, he can be given a bath with dog shampoo and conditioner that is formulated for white coats.  He rarely has a doggie smell and baths should be infrequent to avoid irritating his skin.

The hair behind his ears can easily get tangled and should be brushed out regularly. His outer ears can be wiped with damp cotton containing gentle dog ear cleaner.

The American Eskimo Dog is adaptable to any household from apartment to houses with yards. Even though he loves cold climates, he is not suited for outdoor living and belongs in the home with his family.

When left alone too much, the Eskie can suffer separation anxiety. If he has to stay home alone, it is prudent to contain him in a dog crate or kennel with his favourite toys.

This dog is vocal and some owners believe he is having a conversation with them. Whether he is barking, owling or even mumbling it is important to know he can easily become a nuisance barker.

When not talking, this breed is chewing. To protect items in the home from his jaws, he needs lots of hardy dog chew toys and treats, the best of which provide dental care benefits.

The Eskie is a generally healthy breed but is predisposed to health problems like:

With access to proper care and nutrition, the American Eskimo Dog can live up to 15 years.

The Eskie has a striking physical appearance and looks like a fluffy beautiful cloud. He is ideal for a busy household where people can keep up with his energy levels and is better off with a confident experienced dog parent.

The best place to start when adopting a dog is by doing your research. Our team at All The Small Dog Breeds have done the work for you by providing detailed small dog breed descriptions.

It is important to match up with the best breed compatible with your home and lifestyle. Responsible dog ownership involves adopting from a local animal shelter or registered breeder.