The Australian Terrier is a handsome small dog breed. Nicknamed Aussie, he is the smallest of the working terriers. This spirited dog is upbeat with a strong affinity for children, senior citizens and persons living with disabilities. 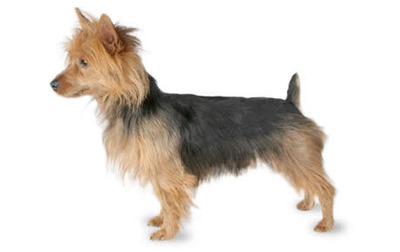 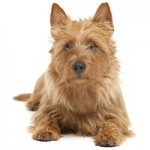 As his name suggests, this terrier was developed in Australia. He is believed to be a product of crossing several terriers including the Dandie Dinmont, Skye, Yorkshire and Black and Tan Terrier.

The Aussie was developed to be tough and hardy to withstand the harsh conditions in Australia. He needed to be a fearless hunter to control and kill rats and snakes found in the mines, waterfronts and sheep stations.

The dog also served as a shepherd, watchdog and companion.

When he was first shown as a native breed, he was called the Australian Rough-Coated Terrier. He was officially recognised as the Australian Terrier in 1897.

British aristocracy and foreign service exported the Aussie and it was recognised by the Kennel Club of England in 1933. He debuted at the Westminster Kennel Club show in 1957.

Travellers and servicemen took the Aussie to the United States and the author of Australian Terrier, Nell Fox shone a spotlight on the breed. The American Kennel Club recognized the Aussie in 1960.

The Aussie is a small dog with stubby short legs. His torso is long in proportion to his height. Like the Corgi and Dachshund, his body is low to the ground.

He has a rough outer coat but the undercoat is soft. The fur forms a ruff around his neck, is longer on the chest and head, and gets shorter on the muzzle, lower limbs and feet.

* Red with a sandy variation

The Aussie is a true terrier. As a working terrier, he enjoys being busy but is also playful and fun-loving.

He is courageous and tenacious. His hunting instincts will have him chasing down squirrels, rabbits and other small animals.

Hardworking, loyal, confident and alert, this breed makes an excellent watchdog. He is sensitive and forms strong bonds with his family. He will often match his mood to theirs.

The Aussie likes to fool around and entertain his people. He makes a good playmate for children but should be supervised because he doesn’t tolerate rough handling.

Like other terriers, this dog loves to dig. When left alone in the yard, he will amuse himself by tearing up the lawn or garden.

The Aussie believes he is a big dog and can be bossy. He is aggressive and not afraid to challenge bigger dogs. It is important to supervise his interactions with other dogs to make sure he doesn’t get hurt.

The Aussie is intelligent and highly trainable. He is a quick learner and gets bored easily by repetitive training.

Training sessions should be fun and challenging to keep him interested. He also responds well to positive reinforcement like words of praise, dog treats and loving cuddles.

Early training and proper socialization will help the Aussie realise that he is not the pack leader and become a well-rounded dog.

The Aussie is energetic and needs a lot of physical and mental stimulation. Several walks a day and active play will keep him from getting bored and happy.

Because of his instinct to chase, he needs leash training and access to a securely fenced yard. This will protect him from running off and getting into trouble.

This terrier is not a fussy eater and has a good appetite. He is not prone to excess weight gain because he doesn’t usually overeat.

Guidelines recommend that an adult Aussie needs ½ to 1 cup of high-quality dog food. He should always have access to fresh clean drinking water.

The Aussie is low shedding and requires low maintenance. His shaggy coat needs regular brushing and combing to remove dirt, and a bath every three months or when necessary.

Too many baths will cause the weather-resistant coat to lose its coarseness. A show Australian Terrier should not have a soft coat.

His coat needs to be plucked when necessary but not clipped with a dog trimmer. Overgrown hair in his ears can block the canals and needs to be cut carefully with the appropriate dog grooming tool.

It is important to start brushing the Aussie’s teeth from puppyhood to prevent gum disease and bad breath. His nails should be kept short and neat by clipping them once a month.

This terrier is adaptable and can live happily in an apartment as long as he gets plenty of exercise and is trained to stop barking on command.

He is an indoor dog and likes to be involved in family activities. He likes to stay busy and will follow them from room to room.

The Aussie is not suited for homes with small pets like mice, rabbits, hamsters and cats. He might get along with a cat when raised together but he will still consider neighbourhood cats as a fair game.

Because it is harder to train this terrier to stop digging, he can be guided to nurture this instinct on an assigned spot in the yard.

He might venture off onto a different spot but this can be avoided with close supervision.

The Aussie is generally a healthy breed but is predisposed to health conditions like:

The Aussie has a life expectancy of 12 to 15 years.

The Australian Terrier is a true terrier that is lively, spunky and loves to dig, bark and chase. He makes an excellent companion for a household that can keep him busy.

Adopting a dog requires research to make sure you can feed, train, exercise and provide adequate care and companionship.

Our team at All The Small Dog Breeds provides detailed small dog breed descriptions to guide you in the process. Once you have identified the ideal match, visit your local animal shelter or registered breeder to find your new furry friend.