The Basenji is a little-known small dog breed from Africa. Nicknamed the “barkless” dog from Africa, this rare breed is admired for his attractive build and unique temperament. 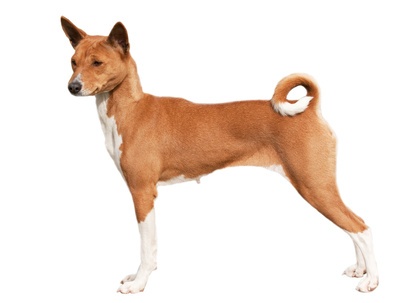 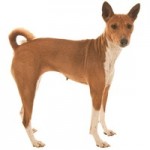 The Basenji is believed to be an ancient breed that was discovered in the 19th century by European explorers in the Congo region, West Africa.

His name comes from the Lingala language of the people of Congo which means savage. They also called him the dog of the bush. In Southern Sudan, the Basenji is known as ango angari. In Swahili, he is known as mbwa shenzi (savage dog) and mbwa wa mwitu (wild dog).

He is believed to have been domesticated to help hunt for food, control rodent populations, carry goods and as guard dogs. Any intelligent and resourceful Basenji was valued more than having a wife in some communities.

The Basenji was different from other dog breeds in the following ways:

* He would bark once and then go quiet. This was why he accompanied hunting parties

* He was not fully domesticated

* He has a higher metabolism

The first attempts to take the Basenji off the continent were unsuccessful because they would die of diseases. It was only in the 1930s that some Basenji began to thrive in England and the United States.

Two years after the Basenji Club of America was created in 1942, the American Kennel Club officially recognized the breed.

The Basenji has a small muscular body, graceful neck and a curled tail. His ears are carried erect and he has a wrinkled brow that gives him a mischievous quizzical expression.

This dog has a striking short coat with fine hair. He has white paws, chest and tip of the tail on coat colours that include:

He may have white legs, a white marking around his neck and a white line from the centre of his face to between his eyes. The white markings on his body are usually quite visible, even when is dirty.

The Basenji is alert and curious. He will stand on his hind legs like a meerkat if something has caught his attention.

He is affectionate and attaches himself to a single person. He is aloof with strangers.

This hound likes to climb and will easily scale up a chain wire fence. He is an escape artist with a strong prey drive. As a sighthound, anything that moves, he will chase.

Unless he is brought up with a cat or other small pets, he cannot be trusted around them. Any small mammals outside the home will be deemed as prey.

Even though the Basenji is known for not barking, he can still communicate with a yodel, scream, growl, whimper and whine.

The Basenji is highly intelligent and a good problem solver. He is stubborn and not eager to please.

He can be taught commands but he chooses if he will obey. He thinks about how the request will align with his needs or wants.

Proper socialization and training are necessary for the Basenji. Believed to be partially domesticated, he should be exposed to different sights, sounds, people, animals and experiences.

Rewards-based training will keep training interesting. Any harsh words or treatment will make the dog more stubborn and unwilling to listen.

As a hunting dog, the Basenji requires daily physical exercise which can be met by regular 30-minute walks and active play.

The Basenji is pretty resourceful when it comes to food. He will jump onto the kitchen counter or break into the room that houses his kibble.

His body is not built to carry excess weight. Monitor his food intake and limit the number of treats. The recommended daily amount for an adult Basenji is ¾ to 1 cup of dog food.

The Basenji likes to keep himself clean like a cat and is a low shedder. Baths are given every two months or when necessary.

This small dog breed is a winner in the show ring for his proud manner and beautiful copper coat. He doesn’t need trimming or costly grooming to be ready for his category.

Other grooming habits include:

* Daily brushing of the teeth

* Weekly examination for any signs of infection in the ears, nose, mouth, eyes and feet

This dog is adaptable to life in an apartment or house with a yard. He is not very keen on children even though he makes a good playmate.

It is best to adopt a Basenji puppy and bring him up with the kids in the home. Adopting an adult is ideal for a household with big children who can interact with him responsibly.

This dog belongs in the home with his family. Protecting your valuables is recommended with a Basenji in the home because he will chew or eat anything he can find.

The Basenji doesn’t like wet weather and will be reluctant to walk in the rain unless it is a really hot day.

Any time spent playing outside should be supervised because this dog can climb over the fence to explore or chase something interesting.

The Basenji is generally a healthy breed but is susceptible to developing certain health conditions and diseases:

A healthy Basenji has a life expectancy of 10 to 12 years.

Living with a Basenji requires patience, kindness and a sense of humour. This little dog is adaptable and a good choice for novice parents. All he needs is lots of exercise, time and attention.

Here at All The Small Dog Breeds, we appreciate that every breed is unique. We understand the importance of connecting dog parents to a breed that suits their home and lifestyle.

We suggest that you adopt from a reputable breeder or local animal shelter.