Were you aware that the Cavalier King Charles Spaniel is among the largest of the toy breeds? This popular, playful, and compassionate breed traces its roots to a royal lineage. Bred to offer companionship, the Cavalier’s fluffy coat gave their regal owners warmth in chilly castles.

When not sitting on a lap getting caressed, the Cavalier enjoys the outdoors chasing or flushing out birds and butterflies. Like all other small dog breeds, the Cavalier requires constant care and will never thrive in an environment where he is left alone for prolonged periods. 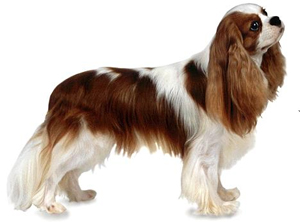 As its name states, the Cavalier is a descendant of a small dog breed commonly known as the Spaniel in the 17th century. The breed was popular among the nobles and royal families of Europe, serving the vital function of warming their owners and attracting fleas.

The breed derived its name from King Charles 1 and his son King Charles II, who had a special affection for this small dog. King Charles II was seldom seen in public without the company of one or more of his Cavaliers. He extended his love for the breed by signing a decree to give the dog unrestricted access to any public building, an act that was not expected.

After King Charles II’s death, the Duke of Marlborough reinstated himself as a prominent advocate of the breed. The Blenheim color, his favourite, was named after his estate.

During Queen Victoria’s era, breeding was conducted with flatter-faced breeds such as the Pug and Japanese Chin, which eventually led to the Cavalier King Charles Spaniel’s birth in the United Kingdom. In the 1920s, the breed’s look was further refined, leading to the Cavalier we know today.

The American Kennel Club officially recognised the Cavalier King Charles Spaniel in 1995, and its popularity continues to soar.

The Cavalier King Charles is a small dog with a distinctive facial expression because of his widely set apart dark brown eyes. You can spot its slightly rounded head, short, strong legs, and compact body from a distance.

Cavalier’s alert nature is complemented by his long, feathered ears set high on his head and a long curious neck. The long, silky, and soft coat is found in various color combinations:

Undoubtedly the Cavalier is the top contender in tail-wagging with his plumy tail that is always in constant motion. These pups love to follow behind their human companions around the house. Their beautiful appearance almost demands endless love and treats from their owners.

The Cavalier is playful and affectionate with an intelligent trait that makes them ideal house pets. The breed is friendly and always eager to make new friends, especially those offering treats or pats.

Like all other small dog breeds, the Cavalier comes with various personalities; some are calm and content while others are disorderly and loud. Due to their accommodative nature, the breed is kid-friendly and can be trusted around the home.

Cavaliers love the outdoors where they can explore, sniff and flush out other small animals. If you are looking for a good watchdog, the Cavalier might not be the best choice because he may not bark sometimes.

The Cavaliers’ are generally intelligent and respond well to positive training. They can learn new tricks quickly. Hold a useful training session and keep a reward handy for your dog to learn a new skill.

Like other small dog breeds, the Cavalier does not respond well to harsh training and will sometimes show dissatisfaction. Always try to be patient with your Cavalier. Expose your puppy to early socialisation and training to achieve holistic growth. With the right training, the dog will be a well-behaved companion in your home.

The Cavalier requires regular exercise with activities like short walks or playing fetch. Regular exercise improves your dog’s health and keeps his weight in check. The Cavalier can be delicate and should not be exposed to hours playing in direct sunlight.

Nourish your Cavalier twice a day with good quality dry food. The amount of food depends on his size, age, and activity levels. The pup should always have access to clean, freshwater. Using narrow food and water bowls are preferred because of the breed’s long ears. This will prevent food particles from being attached to the Cavalier’s fur.

If you’re looking for a breed with low grooming needs, this might not be the best dog for you. The Cavalier has feathery long ears and feet that require regular maintenance to minimise tangles and matting of the fur.

The breed requires regular combing of its coat and sometimes clipping during hot weather. This dog needs a bath with reasonably warm water. Trim the nails once a month. During grooming, check for rashes, sores, and tenderness as they are signs of infection. Always ensure that the dog’s eyes are free from discharges.

Cavaliers’ quiet nature makes them ideal for apartments or homes with small yards. With this breed, you will need to keep them on a leash while out in public and ensure your backyard is secured with a well-built fence.

The Cavalier dog is generally a healthy breed. They have average energy levels with a life expectancy of 9-14 years. They are susceptible to becoming fat and should avoid table scraps and instead keep to a healthy diet and regular exercise.

Here at All The Small Dog Breeds, we are dedicated to small dog breeds. The Cavalier King Charles Spaniel melts hearts everywhere he goes. This breed has a dependent personality and loves to be around people.

To acquire your own Cavalier King Charles Spaniel, identify a responsible and accredited breeder or visit your local animal shelter.