Fondly nicknamed Dandies, the wonderful Dandie Dinmont is a terrier breed. Known as the gentleman of the terrier family because of his calm and reserved personality, this small dog is tenacious and loves to hunt. Independent and easy-going, Dandies are excellent little companions with a beautiful temperament. 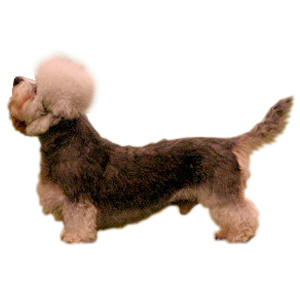 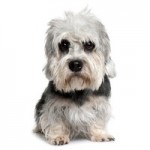 This small dog breed was developed in the early 18th century and is one of the oldest distinct terrier breeds. There are, however, conflicting stories about how Dandies came to be.

Some believe the Dandie was a cross between Otterhound and local terriers that lived between Scotland and England. Another theory says that Dandies evolved from the rough-haired terriers that lived in the farms around the same border country. Farmers and gypsies used these terriers for flushing out otters, badgers and foxes.

A third theory claims that Dandies resulted from crossing terriers with Dachshunds, which were developed in neighboring Germany. No matter the view, this small dog hasn’t changed much since his creation.

The breed was publicized by a 1770 portrait of Henry, the third Duke of Buccleuch, but did not have a unique name. All types of terriers were simply called terriers.

In 1814 Sir Walter Scott wrote a book called Guy Mannering, where a farmer named Dandie Dinmont had six tiny long terriers who came to be known as Dandie Dinmont’s terriers. This book led to the fame of this dog breed and the adoption of the breed’s name.

The Dandie Dinmont has a unique physical appearance with a long body that is low to the ground and a distinct poof of soft silky hair on his head.

The Dandie has a large domed head, dark eyes, hanging ears set low and a topline that is low at the withers, arching slightly over the loin.

Dandie Dinmont terriers have a mixture of medium length soft and stiff hair. The topcoat is crisp, while the waterproof undercoat is soft and downy. Coat colors are pepper and mustard. Pepper includes all shades of gray and silver, while mustard consists of all shades of brown and fawn.

The Dandie Dinmont is pretty much like other terriers, bold, independent and tenacious. With family members, the Dandie is lively and affectionate. Among strangers, this pup can be dignified and reserved.

Dandies let out a deep and loud bark when necessary but are not excessive barkers. They are highly confident and not as high-strung as other terriers. They do not seek our confrontations but will not back down when pushed too far. They have a laissez-faire attitude to life.

This terrier gets along well with children and other pets, primarily when raised together. Adult Dandies, however, do better in homes with older children.

Dandies are intelligent dogs. They get easily bored by repetitive tasks and are independent thinkers. Using fun training methods will produce better results, and the Dandie will learn quickly.

Crate training can be used when housetraining becomes challenging.

Dandies need moderate walks of twenty to thirty minutes or a play session every day. To keep the Dandie in shape, regular physical exercise and monitoring of food intake are recommended. A maximum of one and half cups of high-quality dry dog food a day can be served twice a day.

This breed has large eyes and a lot of topknot of hair, which can irritate the eyes. Scissoring and shaping can be done at home or by a professional dog groomer.

Trimming the nails regularly will keep them short and neat to prevent accidents like the Dandie getting caught in curtains and upholstery. Cleaning the outer ears and making sure the eyes are clean is part of the Dandie’s weekly grooming.

The Dandie Dinmont is adaptable and enjoys being close to his family, whether living in an apartment or country home. This terrier likes digging and requires supervision when playing outside. It might be prudent to assign a particular spot for him to explore safely.

Walking this terrier is best when on a leash because he has an instinct to hunt and chase when he sees moving squirrels, birds or other animals. Unlikely to back down from a direct challenge by another dog, be sure to keep the Dandie on the leash until they are on friendly terms.

The Dandie has a long back and can be easily injured when hopping on and off high places. To discourage these risky moves, it is best to provide dog stairs or ramps.

The Dandie Dinmont terrier is a generally healthy dog, but he is prone to some health concerns.

The Dandie Dinmont has a lifespan of 11 to 13 years.

The Dandie Dinmont Terrier is a unique small dog breed with a beautiful disposition. This plucky dog is independent and one of the calmer and most intelligent terriers. One look at those large expressive eyes and the bushy knot on his head, and anyone will fall in love.

Here at All The Small Dog Breeds, we provide well researched small dog descriptions to help new and old dog parents to connect with the dog that fits their lifestyles. We encourage the adoption of rescue dogs or finding a credible local breeder.