The Fox Terrier is a classic small dog breed that hasn’t changed much since his introduction in the 18th century. Nicknamed Foxy, this dog loves to live in the moment and makes a beautiful companion for active and outgoing people. 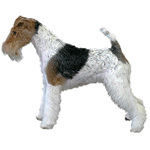 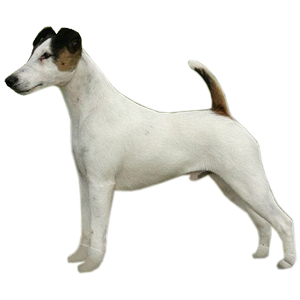 Fox Terriers got their name from what they were developed to accomplish- terrify and flush foxes out of their dens during hunts in England. They thought that the breed resulted from the crossbreeding of Bull Terriers, Greyhounds, Beagles and black and tan smooth coated terriers.

Even though they are currently popular companions today, Foxies can occasionally be found performing their traditional role in the hunting country of northeastern United States.

This small dog breed comes in two varieties: wirehaired and smooth-haired. Although the two varieties share structural makeup, they differ in ancestry and the texture of the coat.

The American Kennel Club officially recognized the Smooth Fox Terrier and the Wire Fox Terrier as separate dog breeds in 1985. However, their breed standards are still maintained by the American Fox Terrier Club.

This pure-bred small dog breed has a small, compact, muscular body built for agility and speed.

Both varieties of the breed have a long sleek face complemented with ears that fold forward towards the cheeks.

While the Smooth Fox Terrier’s coat is dense, short, and flat against the body, the coat of the wirehaired variety is rough and bristly. The nature of the wirehaired coat makes them good choices for some allergy sufferers.

They have hairs covering the inner thighs and the belly and are predominantly white with patches of black and tan.

Since their traditional role was to hunt, Fox Terriers have good eyesight, a keen sense of smell and an extreme staying power to get the job done. This applies to every activity they engage in, from digging the yard to playing a game of fetch.

When active, the Foxy is the happiest dog, especially if his family is always on the go. He makes a good companion and protects his owners. In addition, this dog can be vocal and makes an excellent watchdog.

Fox Terriers are intelligent but a bit stubborn. It is relatively easy to train them but needs a firm and consistent hand.

Because they like to dig and bark, Foxies need to be trained to stop any excess barking and destructive behavior on command.

This small dog breed likes to dominate over other dogs and needs proper socialization during puppyhood.

Leash training is essential. Once the Foxys spot anything that catches their attention, they forget what they were doing and start running after it, risking injury if the dogs run into traffic.

Fox Terriers are a highly energetic breed. They need vigorous daily exercise of about 30 to 45 minutes. In addition, they need to burn their natural energy lest they turn into nuisance barkers or become destructive.

This small dog breed needs 1.5 to 2 cups of high-quality dog food daily, divided into two meals, in the morning and evening.

However, how much the Fox Terrier eats depends on his build, age, metabolism, size, and activity level. Dogs are also individuals, just like human beings, so the quality of your dog food matters a lot in dog nourishment.

To keep the Fox Terrier in top form and avoid overeating, meals should be provided twice a day and monitored instead of leaving food out in his bowl all day.

Smooth Fox Terriers are a bit easy to maintain because they are generally clean dogs. Occasional brushing of the fur with a firm bristle brush is enough to keep them clean and remove the shed hairs. Once in a while, you can provide a bath, but it is not necessary, only when they get muddy.

Due to the nature of the coat of the wirehaired variety, these dogs don’t shed very much. But they require regular brushing to keep their coat odor-free and clean.

You also need to hand-strip your wirehaired Fox Terrier to get the texture this breed is known for by plucking out the hair rather than cutting with clippers or scissors.

If you want your wirehaired Fox Terrier to have a soft coat, you clip its hair, but the consequential result of this is a pale-coloured coat. Give your dog regular trims to keep them neat and maintain their feet in good condition, as well as protect yourself from getting scratched.

Just because this dog breed is small in size doesn’t mean it is suited for apartment living. The Foxy adapts well to a securely fenced yard where he has the freedom to run and jump all day.

Due to its strong hunting instincts, this dog can chase anything that moves. So, you need to keep him on a leash if in unfenced areas.

They are generally loyal, protective, and affectionate towards their owners. They like staying around children because children like playing and so does the dog.

Generally, Fox terriers are a hardy breed, and so they rarely experience significant health problems. However, not all of these dog breeds will get any or all of these diseases from the following conditions.

Fox Terriers have an admirable lifespan of 10 to 15 years.

Fox Terriers are a brilliant small dog breed. They are handsome and elegant, especially when appropriately groomed. This hardy breed can live a long, happy life with his outgoing fiery disposition and reckless abandon. The Foxy is a self-assured breed that will always stay a step ahead of his loved companions.

At All The Small Dog Breeds, we work hard to provide helpful small dog descriptions to aid your search for a new four-legged companion. However, it is essential to consider your choice of breed to find a dog that you clearly understand and fits your home and lifestyle.