Affectionately nicknamed Frenchie, the French Bulldog is a small dog breed with an odd physical appearance. However, this playful dog has a unique appeal and makes him one of the best companion dogs. 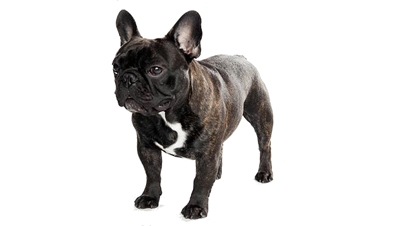 Initially, the French Bulldog was created in England as a miniature bulldog, toy-sized, and weighed less than 11kg. In the mid-19th century, English lacemakers emigrated to France, and they took these dogs that also served as excellent ratters with them.

While in France, these bulldogs, particularly the erect-eared ones, fascinated women of France. But, ironically, England dog owners did not appreciate this same erect ear feature.

The French started breeding these bulldogs to develop the straight bat-eared breeds that found favor with many upper-class homes.

In 1898, an exquisite French Bulldog show was sponsored by an American club which soon led to the French Bulldog capturing the hearts of many. In 1913, this breed dominated most of the famous United States dog shows.

The French Bulldog has a wide, heavy-boned body with a low center of gravity, a big square head, and a short face. He is well known for his distinctive bat ears and his curious and alert facial expression.

His tiny body has substantial, powerful muscles that make the Frenchie very strong despite his size.

The French Bulldog is among the five most popular small dog breeds in America because of his adaptable, playful, affectionate, and general well-tempered nature.

This small dog breed is an excellent companion dog that enjoys spending time with his family. The Frenchie is curious and alert but friendly, sweet, and compassionate, even around other dogs and pets.

The Frenchie can be a bit of a clown. He loves playing and enjoys entertaining the family. Once you become good friends with a French Bulldog, be ready to receive frequent cuddles and smooches.

French Bulldogs are classified as below-average intelligence, ranking 109th out of 138. It is thought that they rank low in their intelligence because of their highly stubborn nature.

This small dog breed has a stubborn streak and requires plenty of patience and positive reinforcement during training sessions. However, with the Frenchie, it is not a case of being too dumb to obey a command, he doesn’t want to.

This shouldn’t be confused with disloyalty. On the contrary, the Frenchie is very loyal to his owners, only that sometimes he can become overprotective or even slightly territorial.

The Frenchie will take better to training when integrated with games. This piques his interest and also makes the session more fun. Crate training is recommended.

The French Bulldog is among the five most popular small dog breeds in America because of his adaptable, playful, affectionate, and general well-tempered nature.

This small dog breed is an excellent companion dog that enjoys spending time with his family. The Frenchie is curious and alert but friendly, sweet, and compassionate, even around other dogs and pets.

The Frenchie can be a bit of a clown. He loves playing and enjoys entertaining the family. Once you become good friends with a French Bulldog, be ready to receive frequent cuddles and smooches.

Generally, French Bulldogs are a clean breed and relatively easy to groom. They are average shedders and need only occasional brushing to take off dirt and stimulate natural skin oils.

Frenchies are prone to allergies that present as skin problems. Therefore, when a bath is necessary, the best dog shampoo will be formulated for sensitive skin.  Unlike other small dogs that get clean on a simple rinse, French Bulldogs need a thorough rinse and drying because of the loose and wrinkled skin at the head and shoulders.

Grooming sessions are ideal for checking for scabs, lesions, bald spots or flaky skin, foul smells or discharge. The Frenchie’s bat ears should be regularly cleaned with a damp, warm cloth. He doesn’t naturally wear his nails down and needs regular nail trimming to prevent splitting/tearing.

This small dog breed enjoys a cool, comfortable surrounding because he is susceptible to heat exhaustion. The Frenchie’s home should be well ventilated and air-conditioned. He is not an outdoor dog.

The French Bulldog does not need a large home and adapts well to apartment life, as long as he gets frequent short walks to prevent excess weight gain.

Frenchie’s are prone to drooling and flatulence.

The French Bulldog breed is genetically predisposed to developing health conditions that may start occurring at the age of two or three years, significantly impacting the dog’s life.

A healthy French Bulldog has a lifespan of 11 to 14 years.

The French Bulldogs is a beautiful dog breed that makes a great companion and addition to any family. This small dog breed is curious and expressive. He needs a lot of love and attention but is also good at reciprocating. The Frenchie is an adorable little dog that is both humorous and mischievous. There is no dull day with him around.

Here at All The Small Dog Breeds, we know how important it is for pet parents to find the perfect fit for their home and lifestyle. Our small dog breed descriptions do all the work, so you don’t have to. Learn more and identify your new canine family member. We recommend adopting from your local animal rescue or reputable breeder.