The Maltese is a small dog breed with a beautiful flowy white coat. He is known by many names – Melitae Dog, Ye Ancient Dogge of Malta, Roman Ladies Dog, The Comforter, Spaniel Gentle, Bichon, Maltese Lion Dog and Maltese Terrier. Even though he looks snobbish, this dog is gentle and loves being with people. Active and sprightly, he also makes an excellent therapy dog and can be easily trained to compete in agility, obedience, rally and tracking. 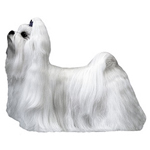 This dog is one of the ancient toy breeds that has been depicted in early civilizations in Greece, Rome and Egypt. The Maltese were prized possessions mentioned by Aristotle, and tombs were erected in their honor.

Egyptians and many Europeans believed this dog breed could cure people of disease. He was called The Comforter because he would be placed as a pillow for the head of the sickly.

Even though there is proof of his long history, his exact origin is not clear. One school of thought is that he came from the Isle of Malta in the Mediterranean Sea, having been developed from Spaniel or Spitz-type dogs.

When the Maltese landed in France in the 15th century, French aristocrats fell in love with him. In the British Isles, was a beloved pet of Queen Elizabeth I, Mary Queen of Scots and Queen Victoria.

In the 17th and 18th centuries, attempts to breed the Maltese to a smaller size almost caused his extinction. To save the dog, breeders crossed the dog with Poodles, Miniature Spaniels and Asian miniature dogs. The varied results produced new dog breeds like the Bichon Frise, Bolognese and Havanese.

The Maltese we know today was developed by English breeders.

The small Maltese has a compact body and a slightly rounded skull. He has a cute black button nose and brown eyes. His winter nose can turn pink or light brown but goes back to black with increased exposure to sunlight.

Famous for the silky white fur covering his entire body and falling to the floor, the Maltese is more than his coat. He has drop ears, short straight legs and a beautiful tail. He carries himself with grace and elegance.

The Maltese dog doesn’t have an undercoat. In his early years, the coat came in many colors but today it is always white. As he moves, he looks like he is floating under a cloud of his long white fur.

A fully grown Maltese measures 8 to 10 inches (20 to 25cm) at the shoulder and weighs up to 7 pounds (4kg). Some breeders develop teacup Maltese dogs that weigh less than 4.5 pounds (2kg) at maturity. Unfortunately, these miniature dogs are more predisposed to genetic disorders and other health issues.

This aristocratic dog breed is charming, sweet and devoted. He has a lively personality and treats everyone he meets as a friend, whether human or animal. This dog is so adorable, a trait that has allowed him to love getting his way.

Pampered Maltese dogs have no tolerance for small children or other dogs. They become overprotective of their humans, bark and may even bite any perceived threat to that relationship.

The Maltese is fearless and makes an effective watchdog.

The Maltese is intelligent and takes well to training especially with the use of positive reinforcement techniques like praise, play and treat rewards. He can be easily taught his place in the home with basic obedience training and early socialization.

Housebreaking this dog can be challenging even though he aims to please. When properly introduced, crate training is invaluable to potty training the Maltese. With patience and consistency, the small dog can be trained to separate the living quarters from their potty areas

Maltese dogs are excellent performers at dog shows and often win the Toy Group and Best in Show categories.

The Maltese can be energetic and can be playful into his senior years. Regular walks or romps outside or indoors can keep him in good form.

Before 8 months old, this dog breed shouldn’t take long walks because his bones are still growing. He can play at his own pace. Any vigorous physical activity should start only after his vet’s authorization.

An adult Maltese requires ¼ to ½ cup of wholesome nutritional dry dog food a day. When in doubt about portions or the type of dog food to give this pooch, consult the dog’s vet.

Despite the long flowy coat, the Maltese dog does not shed. But his coat tends to develop knots easily and become dirty. Coat care involves brushing and combing every day and giving a weekly bath.

When mats form in the long hair, it is recommended to use detangler spray and gently remove the tangles using the fingers. Afterwards, the end tooth of a comb can be used to loosen individual hairs. Trying to force an entire mat apart can be painful for the dog.

Tear stains are common with this dog and are usually caused by blocked tear-ducts, allergies or other health issues. Certain preventive steps can lessen face staining:

The Maltese is a companion dog and requires a lot of attention. Without it, he suffers from separation anxiety and develops destructive behavior like excessive barking. He shouldn’t be left alone for hours.

Bred to be a house dog, this small dog’s paws are very sensitive to touch and he is prone to chills when walking on damp surfaces. He cannot tolerate extreme temperatures and should not be walked outside when it is too hot or cold.

This dog might have a sensitive stomach and should be observed during and after meals for any discomfort. If the Maltese dog is in distress, he should be taken to the vet for a check-up.

The Maltese dog is prone to health conditions like:

The Maltese makes a wonderful companion and is ideal for new parents. He is a good choice for people with dog allergies. He is however not ideal for homes with small children because of his small size and delicate structure. Well suited for small living spaces, the Maltese will bring years of joy and comfort to any household.

Here at All The Small Dog Breeds, we are crazy about our little furry friends. Our small dog breed descriptions are written to help you find your ideal match. Whether you choose to adopt from your local shelter or reputable breeder, we help you identify the perfect dog for your family for that happy ending.