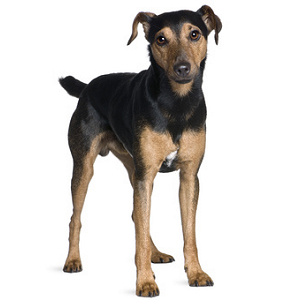 This small dog is one of the oldest identifiable terrier breeds and is mentioned in written works dating back to the 16th century.

In the 1800s, poor sanitation in England led to a rampant rat infestation. John Hulme crossed a Black and Tan Terrier with a Whippet to produce a dog that would excel in killing rats as a sport.

After the sport was banned, the Terriers continued to work as ratters for public inns in the countryside. The breed had a reputation of being determined and spirited when facing foes, even those bigger than the Terrier.

In the 1820s, a Terrier called Billy was famous for killing one hundred rats in 12 minutes. The breed received its name in the mid-1800s from the Manchester District of England. Due to popular demand, the Terrier was crossed with Chihuahuas to reduce their size.

The tiny Manchester Terriers had a thin coat, apple heads and bulging eyes. Although they were delicate and unhealthy, these dogs were beloved pets in the Victorian era. Owners designed special pouches for the dogs earning them the nickname Groom’s Pocket Piece.

The Manchester Terrier has no shared heritage with the Miniature Pinscher and he was used in developing the larger Doberman.

The British Manchester Terrier Club was formed in 1937 and members saved the breed from extinction after the Second World War.

The Manchester has a small sturdy body with a sleek structure. He has a wedge-shaped long head and a bright alert facial expression. The terrier’s ears can be erect, button or cropped.

The compact muscular body is covered by a short black and tan coat.

This terrier is available in Standard and Toy varieties. The toy variety does not exceed 12 pounds (5kg) with the Standard weighing between 12 and 22 pounds (5 and 10kg). Overall, both varieties have the same appearance and they are slightly longer than tall and usually measure up to 15 inches (40cm) at the shoulder.

The Manchester Terrier is a social dog who loves people and has a desire to be around them as much as possible. He does not like being left alone for prolonged periods.

Like other terriers, this breed is feisty and willful. He likes to bark a lot and is quite lively. He makes an excellent watchdog.

A Manchester is loyal and devoted. Although he likes children, this terrier can be easily hurt by younger children. He is best suited for a home without younger kids.

This small dog is not as scrappy as other terriers but he has a strong prey drive. He gets along well with other dogs and might be a little nervous around felines. Smaller pets like guinea pigs and hamsters might be in danger around the Manchester Terrier.

For a terrier breed, the Manchester is intelligent and more amenable to training. He however still believes he is the boss and if this perception is not corrected, he can be quite the menace. Early socialization is mandatory because he is headstrong and snappish.

This stubborn dog requires thorough, firm training to show him that his human owners are the leaders. He is very keen and perceptive and he can take advantage of any inconsistencies in training.

The Manchester Terrier requires regular physical and mental exercises to keep him from getting bored and destructive. A minimum of 30 minutes a day is recommended with activities like:

He can participate and enjoy dog competitions which will keep him physically active and intellectually stimulated.

This breed tends to match his activity level to his human companions. He is responsive and holds his end of the conversation.

Terriers should eat according to their size, age, body type, metabolism and level of activity. The recommendation for this adult breed is ¼ to 1 cup of dry dog food a day.

This terrier breed is odorless, clean and low maintenance. Although the dog does not shed excessively, regular brushing with a rubber or bristle brush can remove dead hair and dander. The Manchester sheds heavily in the fall and spring.

Baths can be given when the dog is dirty, using dog shampoo to maintain healthy skin and coat.

To make the Manchester Terrier comfortable during the grooming process, it is best to start when the dog is young. Once he gets accustomed to being brushed, clipped and examined, the terrier will be easier to handle especially during veterinary visits and professional grooming sessions.

Even though the Manchester Terrier is not aggressive, he should not live in a household that keeps rabbits or rats. He is however adaptable and can live comfortably in an apartment or house. He should not live outdoors.

This dog shouldn’t stay out in the sun too long because he will develop heat bumps along his back. He can also get chilly when it is cold outside.

This terrier has a great need for human companionship and thrives when most of his activities are held together. He can suffer from separation anxiety and is not recommended for a household where he will spend many hours alone.

A home with more than one Manchester will keep the dogs amused and more active indoors. If adopted alone to live in a house, the yard should be fenced in.

This small dog is a generally healthy breed but is genetically predisposed to health conditions like glaucoma and Von Willebrand’s Disease. With overfeeding and lack of exercise, the Manchester can become obese.

The Manchester Terrier has a lifespan of 14 to 16 years.

The Manchester has a big personality and makes a terrific companion. He is intelligent, independent, faithful and utterly devoted. This terrier has a lot of energy and shouldn’t be left alone to amuse himself. He is sensitive and needs consistent training and socialization to maintain good mannerisms.

Here at All The Small Dog Breeds, we firmly believe that dogs should not be adopted without a clear understanding of what it takes to own one. Our small dog breed descriptions point new and experienced owners towards the dog that fits their household and lifestyle. We recommend adopting your new furry friend from your local rescue or reputable breeder.