The Norfolk Terrier is a small dog breed with a heart of gold. Charming and affectionate, this terrier has an outgoing personality and is never boring. The Norfolk is known to be fearless and often bears scars that attest to his courage. 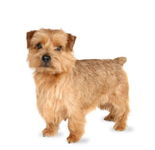 The Norfolk Terrier and the Norwich Terrier were developed together in England near the towns of Norwich and Norfolk and used to be identified as one breed. The distinguishing physical feature is that the Norwich has pricked ears and the Norfolk has dropped ears.

The Norfolk was the result of the crossing of Border Terriers, Cairn Terriers and Irish Terriers. The dog’s main purpose was to work as a farm dog and hunter.

One of the students called Jodrell Hopkins worked with a local dog dealer called Doggy Lawrence to breed and sell red terriers to other students. The breed was later refined by Frank Jones and R.J. Read.

Many of the present-day Norfolk Terriers are descendants of the terrier owned by a red terrier called Brownie that was owned by influential dog breeder Phyllis Fagan. Her dogs were famous in the show ring.

The Norfolk Terrier was officially recognised as a separate breed by the American Kennel Club in 1979.

The Norfolk Terrier looks similar to the Norwich Terrier with the exception of the folded ears. This moderately proportioned dog has a cute face with small dark eyes.

This terrier has a weather-resistant double coat. The undercoat is soft and downy while the topcoat is scruffy and wiry.

He has a ruff of fur at the base of his throat and ears. The fur on his head is short and smooth while it is longer around his neck and shoulders.

The Norfolk Terrier is a good-natured dog. He is lively and always willing to play. This makes him an excellent companion for children.

He is fun and adventurous and it can be exhausting trying to keep up with him. He is not a couch potato and thrives on finding something exciting to do. If he doesn’t get this, he tends to become unhappy.

With hunting instincts, he is prone to give chase, dig and bark. Independent like other terriers, he is also affectionate and loyal to his family members.

The Norfolk has a steady personality and is less likely to be aggressive with other dogs. He will get along well with other dogs in the households, especially when raised together.

It is however not ideal for this terrier to live in a home with small mammals like mice and hamsters because he might perceive them as prey.

This terrier is intelligent, loves to learn new things and is hardworking. Training can be challenging because of his stubborn nature. The key is to be consistent and use positive training techniques like treats and words of praise.

Yelling or using physical force on a Norfolk Terrier will result in him being fearful and agitated. He is a highly sensitive dog and it is important to teach him how to obey basic commands like come and be quiet.

The Norfolk Terrier needs to be walked for a minimum of 30 minutes a day. Beyond daily walks, he enjoys play sessions in the yard or dog park.

This terrier loves to eat and is prone to gaining excess weight. Wholesome complete nutrition is available in high-quality dry dog food and an adult Norfolk should have a maximum of one cup of it divided into two meals a day.

The double-coated Norfolk usually has a shaggy unkempt look. He is considered hypoallergenic but sheds a little throughout the year. Routine grooming sessions should start early so the terrier is accustomed to being handled.

Weekly brushing of the coat is recommended using a steel comb. This will prevent matting and remove loose and dead hair. Baths can be given when needed using a dog shampoo but not too often as it softens the harsh coat.

Hand stripping of the coat is common for show dogs but can be done twice a year for a family dog. Clipping or cutting the coat will run its color and texture.

The Terrier’s nails should be kept short to avoid injury and discomfort. If the nails can be heard clicking when the dog is walking, they are too long.

To prevent ear infections, it is important to clean the outer part of the dog’s ear and pluck any overgrown hair. Any eye discharge can be cleaned with a moist cotton ball.

Use specially designed toothbrushes and toothpaste to clean the dog’s teeth every day. This will prevent the growth of bacteria in the mouth and remove bad odor.

The Norfolk Terrier is easy to care for and his small size makes him suitable for apartment living. He should however receive daily exercise and be kept entertained while indoors or he might become a nuisance barker.

Great with children, this small terrier makes a good family dog. He is best suited for homes with older children to reduce the risk of being trampled or hurt.

The Norfolk is not a kennel dog and prefers living in the home with his family.

Generally, a healthy breed, the Norfolk Terrier is prone to certain health conditions including:

The Norfolk Terrier has a lifespan of 12 to 15 years.

The Norfolk Terrier is a highly active dog with a typical terrier personality that is difficult to resist. This spunky dog is affectionate and loves being around humans. He makes a great companion for people with dog allergies, families with older children and outdoorsy adventurous people.

Bringing a dog into your home is a big responsibility that cannot be taken lightly. Connecting with the right dog breed involves research and here at All The Small Dog Breeds, we make the process easier with our detailed small dog breed descriptions.