Descended from toy spaniels, the Papillon is an attractive small dog breed that is known for his sparkling personality. Even though he looks like a lap dog, this breed is highly active and is not happy to lounge in the home all day. The Papillon thrives on human companionship and suffers from separation anxiety when left alone for hours. 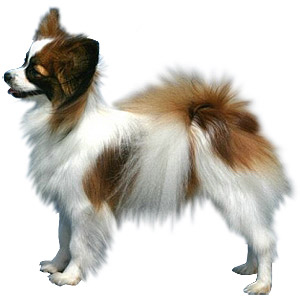 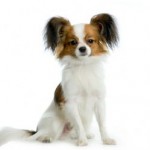 Various artworks dating back to the 16th century show that the Papillon has been a human companion for court ladies in France, Italy and Spain. The name Papillon means butterfly in French and he was given the name because of his upright ears which resembled a butterfly.

Once known as the Epagneul Nain (Dwarf Spaniel), this dog has changed his appearance over the years. He was also given names like Dwarf Continental Spaniel, Belgian Toy Spaniel and Little Squirrel Dog.

The original Papillon were solid coloured. Two varieties existed with the only physical difference being their ears. Phalene (moth) was the name given to the drop-eared variety.

Papillons tend to have small litters making the breed not that common nor rare. Today’s Papillon resembles the one portrayed in a painting in the Louvre in France.

The Papillon has fringed upright ears. Although not as common, the drop-eared variety (Phalene) can be born in the same litter.

Because of his size, he might be categorized as a lap dog.

His single coat is long and flowy with straight silky fur. On his chest is a cascading frill of hair and his ears are fringed with hair. The inside of his ears is covered with medium length hair.

The backs of his forelegs are covered by feathering and the back legs have breeches/culottes, a fringe of long fur on the thighs. The tail is long with a flowing plume carried arched over the body.

The Papillon is usually white with patches of any color.

This small dog has a happy and friendly personality. Normally not shy nor aggressive, the Papillon is bright, busy and curious. He is fearless and alert with a big-dog attitude making him an excellent watchdog.

He loves being with people and gives kisses away freely. He gets along well with children but is safer in the hands of older children who can safely interact with the dog.

A tiny dog in the arms of a toddler who can’t hold him correctly can easily leap and get injured. The dog can also be mishandled, defend himself and hurt the toddler.

The Papillon gets along well when raised together with other dogs and cats. He might however tend to boss around the other dogs, which is not unusual but needs to be supervised to ensure problems don’t arise.

When kept on a schedule, the Papillon is easy to housetrain. The dog needs to go potty when he wakes in the morning, after every meal, nap, playtime and before bedtime. If unsupervised, a dog crate can be used.

This beautiful dog is highly trainable and enjoys dog sports like rally and agility. He normally ranks number one in obedience competitions.

Perhaps a factor of the dog’s origin, the Papillon can be a little haughty and strong-headed.  To prevent the development of a stubborn streak, early socialization and obedience classes are recommended.

With a strong desire to please and succeed, the Papillon is willing to learn anything, from tricks to pulling a cart.

The Papillon is high to moderately energetic and outgoing. He enjoys a good yard where he can run freely. If the home has no yard, regular visits to the dog park will do.

Regular 20-to-30-minutes walks are necessary for the adult but Papillon puppies need shorter walks. When the dog stops or sits down, he is communicating that he is tired.

As a housedog, the Papillon can easily become overweight. His meals should be scheduled for twice a day rather than leaving a bowl of food out. The recommended portion for an adult Papillon is ¼ to ½ cup of highly nutritious dry dog food.

Though the coat is flowing and profuse, this dog’s coat doesn’t shed excessively and is easy to maintain. Regular combing and brushing can remove dead hair and distribute natural skin oils to keep the coat healthy and shiny.

Baths can be scheduled when needed because this dog doesn’t emit doggie odor. A moist cotton ball can be used to clean the ears and the nails can be kept short with a dog nail clipper.

To prevent periodontal disease, daily brushing of the teeth is recommended. This should start early to keep the teeth clean and tartar free.

The Papillon is not a lap dog. He likes to find something to do and might even chase around any rodents lurking in the home.

He is not suited for outdoor living.

Like a mountain goat, this dog likes to run through the house, jump on furniture and is not afraid to climb to the highest spot in the home. To avoid injuries, the dog can be taught to use dog steps.

This breed is sensitive to anesthesia and predisposed to genetic health conditions like:

This small dog breed has been around for centuries and is very people-oriented. He needs to be included in the lives of his family and doesn’t like to be left alone. Though fragile and not suitable for homes with small children, Papillon believes he is a large dog and is not afraid to stand up to bigger dogs.

Here at All The Small Dog Breeds, we understand our role to guide new and existing dog owners to find the perfect fit for their homes. Our small dog breed descriptions