The Pembroke Welsh Corgi, also called Pembroke, Pem or PWC, is a remarkable small dog breed known for having short legs and a happy demeanour. Active and intelligent, this Corgi will surprise you with how fast and agile he moves. Whether in a small or large home, the Pembroke Welsh Corgi is adaptable and affectionate with all family members. 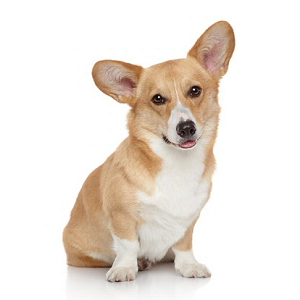 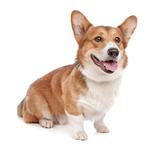 As the name suggests, this Corgi dog breed originated in Pembrokeshire, Wales and was bred to herd cattle, sheep and horses. A Welsh tale spins that this Corgi is an enchanted dog that came from fairies and elves.

The legend says that two children taking care of their family’s cattle found some corgi puppies in the fields. Even though the children thought the puppies were foxes, they realised something different about them and took them home.

When the children’s parents saw the puppies, they told their children the puppies were a gift from the fairies who lived in those fields. They said fairy saddles made the marks on the puppies’ backs to pull the fairies’ small carriages when they rode into battle.

Another origin story states the Pembroke Welsh Corgi came from Swedish cattle dogs called Vallhunds in the 9th and 10th centuries. Other historians believe the breed came from Flemish weavers in the 12th century.

This Corgi is related to the Cardigan Welsh Corgi and was registered as one breed from the 1920s until 1934 by the Kennel Clubs. Pembrokes were so popular that King George VI gifted one to his daughter, Her Majesty Queen Elizabeth II of England.

Pems are built long and low. They have a well-built small body with their signature short but powerful legs. Their ears are held erect on a triangle head, and they taper to rounded points. Built the same as the Cardigan, Pembrokes have slightly smaller heads and docked tails.

Pembrokes have a weather-resistant double coat. The undercoat is thick, and the topcoat is longer with fluffy fur on the ears, chest, legs and feet. The straight coat is slightly harsh and coat colors include black, red, sable, tri-colored or fawn. All coat colors might have white markings.

The “fairy saddle” back referred to in their fantastic origin story is a marking caused by a change in the thickness and direction of a strip in the fur.

Pems began as working dogs but have evolved to become wonderful family pets due to their loving and happy personalities. They are devoted and eager to please.

These tiny pups have an affinity for children but can sometimes nip at the heels because of their herding instincts. With early socialisation, this annoying habit can be nipped in the bud (pun intended). Pems can also live happily with other pets in the home, especially if brought up together.

This small dog breed is quick-witted and intelligent but can be stubborn or independent. Pembrokes like to think for themselves and may not be willing to obey instructions. With reward-based instructive experiences, this breed can be easy to train.

Pembrokes bark a lot and can make good watchdogs. They are suspicious of unfamiliar people and alert their owners if someone or something is perceived as a threat.

Housebreaking a Pem can be problematic and crate training is recommended.

Their heritage makes Pembrokes athletic and quick. They definitely require a good amount of exercise every day. A moderate walk on a leash or active training play sessions can keep the PWC healthy and happy.

Pembrokes love to eat and can easily overindulge. It is recommended to measure the dog’s food intake and feed only twice a day instead of leaving food in the bowl all the time.

Coat care involves daily brushing because Pembrokes have coats that shed all the time with heavier shedding twice a year. Regular bathing can control heavy shedding.

Brushing the teeth and nail clipping should begin when the Pembroke is young. Daily brushing of the teeth will prevent bad breath and gum disease. Trimming the nails once or twice a month will avoid tears that can cause pain and bleeding.

Cleaning Pembroke’s outer ears is necessary to remove dirt and prevent infections. Any redness or foul odour indicates a problem and should be attended to by the dog’s vet.

The Pembroke Welsh Corgi can live in any home, whether it is a highrise apartment building or a home with a yard, as long as they get daily walks and active physical stimulation.

The dog’s weather-resistant coat makes them adaptable to live in most climates but should not be left outdoors to live alone. They need human companionship because they are people-oriented.

This small dog breed has short legs and long backs, making them susceptible to fractures when hopping up and down from modest heights. Injuries can be avoided by using dog stairs and ramps to help them up furniture or vehicles.

Pembrokes have an average life expectancy of 11 to 13 years.

Even though Pembrokes are small dogs built low, they are highly active with a lot of love. This breed is bright and sensitive. They enjoy playing and spending quality time with their human families. Vigilant with acute senses, this bold dog breed makes a loyal pet for both new and experienced dog owners.

Our team here at All The Small Dog Breeds enjoys researching and providing information for dog lovers to learn about all the magnificent small dogs. Whether looking to add a new puppy or an older dog to your home, we take pride in being a valuable resource for you.