Nicknamed the PBGV, this small dog breed is quite adorable with his long eyebrows, mustache and beard. Highly adaptable and tough as nails, the Petit Basset is a loving companion for any home. 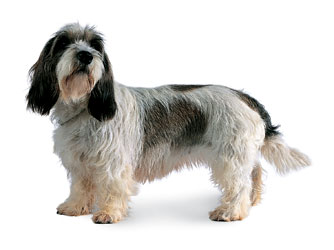 This small breed’s ancestry was developed back in the 16th century in France. His name means small wire-haired short dog from Vendeen, an area on the country’s western coast. The dog would be used to hunt small game like rabbits in the thick underbrush, rocks and brambles of Vendeen.

Standardization of the breed came in 1898 and was called the Basset Griffon Francais. The Club du Basset Griffon Vendeen was formed in 1907 where both the Petit and Grand Basset Griffon were recognised as they could be born from the same litter.

In 1909, the sizes were recognised as two different types of Bassets but it wasn’t until the 1950s that the official breed standard for the Petit Basset was published. Although some officials do not support it, many breeders continue to produce litters with Grand and Petit Bassets.

The Petit Basset received full recognition from the American Kennel Club in 1991 and made his first appearance at the Westminster Kennel Club show in 1992.

The PBGV has a rough and scruffy outline with a body that is longer than tall. The breed is double-coated, moderately long with a harsh texture. In contrast, the undercoat is soft and thick. His long eyebrows stick out without blocking his eyes. Long hair covers the ears, mouth and tail. The hair around the mouth forms a beard and mustache.

Coat colors are predominantly white with:

Some Petit Bassets are black and tan, and fawn.

The Petit Basset is very affectionate with a delightful personality. He is happy, curious and thrives on attention.

He is good-natured and wonderful with children. He is tolerant of all the rowdiness that comes with children, but should still be supervised to make sure the PBGV doesn’t run off through open doors or gates.

The Petit Basset is a pack animal and he gets along well with other dogs. Because of his nature, moving small animals can be perceived as prey.

He has a strong nose and hunting instinct and should not be walked off-leash. When running around outside, he should do so in a securely fenced yard.

Highly intelligent but wilful, the Petit Basset needs a lot of patience and consistency using positive reinforcements like food rewards and words of praise.

Crate training is useful when housebreaking.

This breed loves to bark and makes an excellent watchdog. He will need to be trained on when to be quiet.

Unlike other hounds, this charming dog is busy and not laid back. He is outgoing, highly energetic and needs plenty of exercise.

The best dog food takes into account the dog’s age, size, metabolism and level of activity. Provide two nutritious wholesome meals to the adult PBGV per day. The recommended daily amount is 1 ½ to 2 cups of dry dog food.

When unsure about what and how much food is needed, consult with the dog’s veterinarian or animal nutritionist.

This dog has a casual tousled appearance and requires minimal coat care. Running the coat with a soft bristle brush regularly will reduce shedding and remove loose dead hair.

From an early age, the Petit Basset should be accustomed to being touched and handled for grooming practices like:

Because of his size and love for people, this small dog breed is ideal for apartment dwellers. He is active within the home and should be provided with sturdy dog toys to keep him busy and entertained.

This dog breed should not live in a kennel or outdoors. He does well in most climates but is happier when the weather is cool.

If this hound is bored or left alone for prolonged periods, he will look for ways to entertain himself. He might develop destructive behaviors like excessive barking or chewing on items in the home.

The PBGV is an escape artist. All fencing should be regularly inspected to cover up holes or spaces where he might go through. He will not be deterred by an electric fence especially when he catches sight of moving prey.

The Petit Basset has a life expectancy of 14 years.

Ideal for an active owner, the Petit Basset Griffon Vendeen is a charming dog that loves life and people. He will be happy living in an apartment but requires long walks every day. A pack animal at heart, he is ideal for homes with multiple dogs.

Dog parents need to have a clear understanding of different dog breeds, their personalities and needs. Our team at All The Small Dog Breeds understands the assignment and have compiled detailed small dog descriptions to guide dog lovers to match with a breed that suits their homes and lifestyle. We encourage adopting from your local animal shelter or reputable breeder.