Also known as the Prague Ratter, the Pražský Krysařík looks like a cross between a Chihuahua and a Miniature Pinscher. Currently holding the record for being the shortest dog breed in the world, this small dog breed is affectionate with a lot of character. 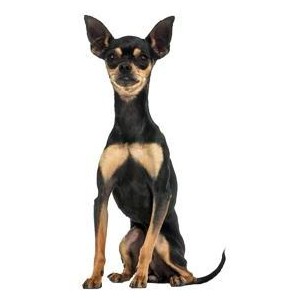 This small toy dog was developed in Prague where Czech breeders claim the breed as one of their oldest.  Writings from as early as the 8th century have mentioned this dog as a pet belonging to King Boleslaw II the Generous.

In the absence of cats, the Krysařík were mostly used to catch rats in rural and urban households in Europe. Some historians believe that the dogs could detect poisoned food and protect their royal owners.

After the Czech state declined, the Krysařík could be found in low-class dwellings, salons of ladies and pets in homes all over Europe.

In the 19th century, the Miniature Pinscher became more popular and it wasn’t until the 1980s that the Czechs exclusively began to breed the Krysařík again.

The Fédération Cynologique Internationale registered the Pražský Krysařík in 2019 and this rare breed is usually presented at dog shows in his home country, Slovakia and Scandinavia.

The Pražský Krysařík has often been confused with the Miniature Pinscher and Chihuahua. This small dog has an athletic lean body like a Doberman. The pear-shaped head is almost fox-like. His muzzle is narrow and his prick ears are large for his head. He usually has a tan spot above the eye.

Short coated Krysaříks have smooth, glossy and thick fur while long-coated ones have fringes of hair on the ears, legs and tail. The straight and slender tail is sometimes docked.

The Prague Ratter is spunky and lively. He is affectionate and depends entirely on his relationships with his human companions. He thrives on being a lap dog when being inactive.

This tiny dog is cheerful and devoted. Other small dogs have been known to be yappy but the Krysařík is content to spend quiet time indoors lounging with his favorite persons.

He has a highly developed sense of smell and hearing which made him an outstanding rat hunter. His high prey drive makes him ready to chase any small mammals.

He is wary of strangers but not aggressive and does not bite. When left alone he will get bored and suffer separation anxiety.

The Krysařík is highly intelligent and obedient. He responds positively to basic commands and training.

Eager to please his owners, this dog will perform any tasks and tricks. He can be trained to use a litter box which makes it easier to take potty breaks indoors.

Early socialization should begin from an early age because this breed can develop Small Dog Syndrome. This is essential to make sure he doesn’t become aggressive towards children or other dogs.

The Prague Ratter is sensitive to harsh training methods. The use of positive reinforcement and rewards-based training will establish trust and respect.

Despite his small size, this dog can be trained for dog sports like agility, freestyle, obedience and tracking.

Even though this breed is happy to spend most of his time indoors, he is energetic and enjoys spending time outdoors taking long walks or playing games like fetch.

He loves nature but should be walked outside on a leash to prevent him from running off to chase squirrels or rodents.

His nutritional requirements can be met by feeding him high-quality dry dog food divided into two meals daily.

Being an adorable lap dog, many owners are tempted to spoil the Krysařík with lots of treats and table scraps. This can easily lead to obesity and the health complications that come with it.

The Pražský Krysařík’s coat is low maintenance. An occasional combing and wiping the coat with a damp towel is all that is needed to keep the coat clean. Baths are given when necessary.

Regular brushing of the teeth is essential for this breed because he is prone to developing diseases of the teeth and gums. Visits to the veterinarian can include appointments for plaque removal.

This tiny pooch adapts well to apartment living because he is comfortable as a house dog.

If the home has any small mammals like hamsters or mice, it is important to note that the Krysařík’s instincts will kick in and he might chase and harm them.

In the cold winter months, this small pooch is affected and should be kept warm with a dog sweater or jacket. His ears should also be lubricated with dog cream before going outside.

On hot days, he should always have access to clean drinking water and be supervised closely to check for signs of overheating.

As a rare breed with a small breeding pool, the Prague Ratter does not have any significant health concerns. The dog is however susceptible to developing conditions like:

The Pražský Krysařík makes an excellent city dog and is recommended for seniors and people with reduced mobility. This docile creature is small enough to take anywhere and he has minimal grooming needs. He creates a strong loving bond with his owners and makes an excellent companion.

Adopting a dog is a lifelong commitment. Many questions come up during the planning process and our team at All The Small Dog Breeds have compiled detailed small dog descriptions to assist in making the right decision.