Bred purely to be a lap dog, the Pug is a small dog breed that is completely dependent on human companionship. Sturdy and compact with a unique comical face, this pup is dignified but not afraid to clown around and be the center of attention. 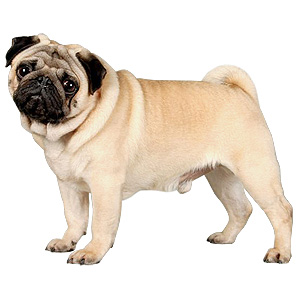 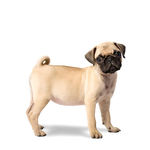 The Pug‘s history dates back to the Han dynasty in China where the dogs were prized possessions of the Emperors. The dogs lived a life of luxury under the constant guard of the imperial guards.

When China began trading with Europe, Dutch traders introduced Pugs under the name Mopshond. The Pug earned other names like Carlin in France, Dogullo in Spain, Mops in Germany and Caganlino in Italy.

The breed became popular with royal families and even earned the title of the official dog of the Holland House of Orange in the 16th century.

In 1861, the breed was first exhibited in England. Recognition by the American Kennel Club came in 1885.

The Pug is a thickset dog with a square body. He has big dark round eyes surrounded by deep facial wrinkles. He has a flat round face that looks like a human fist. His ears can be rose or button-shaped.

His cheeks have moles called beauty spots and his muzzle is black. A distinct thumb mark is on his forehead and he has an undershot jaw. A black trace duns down the center of his back and his tail is tightly curled.

The Pug’s fur is short and smooth. He is double-coated and coat colors include fawn, black, silver and apricot.

The Pug is a happy charming dog. Bred to be a companion, he is affectionate and devoted. He can be mischievous, playful and comical. He enjoys frolicking around and being entertaining.

This beauty is alert and makes a good watchdog. He doesn’t bark a lot and when well socialized, he gets along brilliantly with other pets.

The Pug loves children and is not as delicate as other small breeds. He can be rambunctious to actively keep up when playing fetch or other indoor or outdoor games. Children should be trained how to interact with the Pug to avoid injury to his protruding eyes.

This small dog is intelligent and wilful. His stubbornness can make house training challenging and using a dog crate is recommended.

Training should start early using positive reinforcement techniques. The Pug is observant and smart. He learns quickly and can be trained to perform, often depicted in films like Adventures of Milo and Otis and the Men in Black series.

The Pug is always ready to play and thrives on human companionship. Interactive games are an excellent way to strengthen the animal-human bond while getting some physical exercise.

To keep from being bored and destructive, it is important to keep the Pug stimulated when he has bursts of energy.

He is relatively inactive when indoors and can be a greedy eater. He can easily gain weight and become obese. His food intake should be monitored and he should overindulge.

Recommended food portion for an adult Pug is ½ to 1 cup of high-quality dry dog food per day, split into two meals. Treats should be limited and physical activity encouraged.

This small dog has a short double coat that sheds a lot, especially in the summer. Pug owners should invest in a good vacuum to reduce the amount of hair in the home.

Regular brushing and bathing can reduce shedding. Because he is a housedog with low activity, the Pug’s nails don’t wear down like other breeds. Regular trimming is essential every 3 to four weeks.

Special attention should be given to the facial folds which can become damp and dirty. These wrinkles should be kept dry and clean to prevent the growth of bacteria. Baby wipes can be used in between baths.

The Pug’s bulging eyes are vulnerable to irritations from shampoos and should be protected during baths and grooming sessions.

Regular oral care with a soft doggie toothbrush and toothpaste will prevent the build-up of plaque and prevent bad breath.

The Pug is a sedentary dog that is happy to sit on his owner’s lap while watching television or reading. He is highly sensitive and doesn’t like being left alone. He needs owners that can dedicate a lifetime to love and cuddle.

This breed is sturdy, compact, quiet and not highly active making him ideal for apartment living.

Because of their short muzzle, Pugs tend to wheeze, snort, snore and are sensitive to heat and humidity. This breed shouldn’t be kept outdoors and need to be observed for signs of heatstroke when walking or playing outside.

Like other dogs, the Pug is generally healthy but prone to developing certain health conditions.

This small dog has a compact breathing passageway (BAOS) and is prone to respiratory distress. For this reason, many airlines have banned the transport of Pugs in cargo and often have travel restrictions based on seasons.

The Pug is an excellent companion for novice parents and the elderly because he is easygoing, a delight and fun to be around.   This iconic breed thrives on human interaction and is content to follow, sit and sleep together.

Fewer small dogs would end up in animal shelters if owners understood the different breeds and adopted dogs that match their homes and lifestyles.

A great place to start before adopting a small dog breed is here at All The Small Dog Breeds. Our team understands how a breed search can be challenging and provides detailed small dog breed descriptions to help new and existing dog parents to find the ideal match.