If you’ve ever seen a Puli dog, you wouldn’t forget the distinct long corded coat. This mop-like small dog breed is affectionate and intelligent.  Highly sensitive, the Puli is a wonderful companion to families with children, the elderly and convalescing. 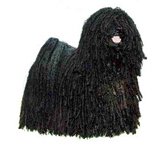 The Puli also called the Hungarian Puli and Hungarian Water Dog has a history that goes back to 2,000 years ago in Hungary with a belief that the breed is descended from the Tibetan Terrier.

The ancient Sumerian civilization used Puli dogs as sheepherders. These valuable dogs were prized for their herding abilities and those found less intelligent or non-performing were culled.

Hungarian shepherds began to breed high-quality Puli in the 1800s and the first breed description was written.

The need and number of sheepdogs were reducing but in 1912, a professor at the Hungarian University of Veterinary medicine and zoologist Adolf Lendl began an experimental breeding program.

The Federation Cynologique Internationale approved the breed standard in 1924 with three categories: working Puli with a shaggy coat, show Puli and dwarf Puli.

In the 1930s, four different sizes of the Puli were recognized:

The most popular size was the medium Puli and owning one was a source of pride for Hungarians. Like other breeds, World War II caused a decline in numbers and kennels gave their breeding stock to other countries.

The Hungarian Puli Club created a breed standard in 1959 where the toy and police sizes were eliminated. All the other sizes were combined into one category.

In 1936, the American Kennel Club officially recognized the Puli breed.

The plural of Puli is Pulik. A litter of Pulik is born with little crimp on their coats which later develops into fluff. Some coats are self-cording while others after a year can be separated into cords for about four months until the cords are permanently set.

The undercoat is usually packed into the outer coat forming a felt-like coat, which fully develops at about four years.

The Puli’s coat makes the dog look larger than he is. Across the back, the width of the coat can be three times more than the dog.

Coat colors are usually brownish fako, solid black, gray and white. Some white hairs begin to grow when the dog turns a year old and the colors fade with exposure to the elements.

The Puli has a stand out personality. He is affectionate and loves being with his family. He can be stubborn and requires a firm but kind hand to keep him in check.

He is fun-loving and outgoing. His personality remains puppyish longer than other breeds. When his hunting instincts kick in, he can be found herding people in the home.

Suspicious of strangers, this dog is alert and makes a good watchdog. He will bark and likes to be vocal. Early training can teach him to stop vocalizing on command.

A well socialized Puli makes an excellent playmate and babysitter for children. He is protective over them and will gently pull them away from any danger.

Early introductions in a positive manner will make it easy for the Puli to get along well with other dogs and pets.

The Puli is highly intelligent and confident. He excels in canine sports like agility and herding. He doesn’t appreciate repetitive training like obedience.

It is important to properly train and socialize this breed because he is a born leader and can try to dominate and boss everyone around him. This natural shepherd is challenging to train in adulthood.

Housebreaking the Puli is challenging because he is strong-willed. To prevent accidents, crate training is recommended.

The Puli loves playing and would benefit from the availability of many different dog toys. A herder by nature, this dog is happier in a home with a large fenced yard or farm where he can freely run around.

Meals should constitute high-quality dry dog food that provides wholesome nutrition. One to two cups a day, twice a day is recommended.

When the Puli gets regular physical exercise and is kept on a feeding schedule, he is unlikely to gain excess weight.

This dog’s unusual corded coat is high maintenance and most new owners would benefit from a professional dog groomer ‘s expertise. Regular brushing for the uncorded coat detangles the fur, removes the dirt and promotes the production of natural skin oils.

Corded coat care involves separating and twirling the cords by hand. Trimming of the coat helps to prevent the collection of dirt.

When it is necessary to give the Puli a bath the cords must be thoroughly soaked with water and shampoo. Drying requires a lot of time and effort because air drying could take days.

Blow drying can speed up the process but the Puli can become irritated by the heat and amount of time it takes.

The Puli can adjust to living in smaller spaces but is better off in a home with a large yard or a farmhouse. He will be running laps in the rooms and leaping over furniture.

Secure yards can keep the Puli from running off and getting into trouble. He can jump over a six-foot fence.

A bored Puli who doesn’t get adequate mental and physical challenges might resort to nuisance behaviors like chewing, barking and digging.

The Pulik might get any or all of the following health conditions:

Hungarians are proud of the Pulik and their herding abilities. This breed is confident, intelligent and affectionate with family and friends. Protective over his “herd”, he will guard against any perceived danger and make an excellent therapy dog.

Growing your family by adopting a dog is a big step. Here at All The Small Dog Breeds, we are dedicated to providing information to help with the search for a dog that fits your home and lifestyle. Our small dog breed descriptions allow you to prepare yourself to make the best decision.