Fondly known as Sealies, the Sealyham Terriers are a small dog breed that is rare and considered one of Great Britain’s endangered native breeds. This dog is enchanting with a wonderful sense of humor. 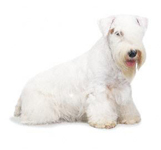 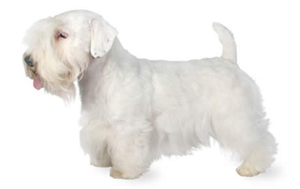 Developed to hunt for small game like badgers, otters and foxes, this white terrier debuted in the show wing in 1903 and five years later, the first Sealyham Terrier Club was formed.

This small dog breed was very popular in the early 1900s and was officially recognized by England’s Kennel Club and the American Kennel Club.

Despite dominating the show ring, he was not popular with the general public and is currently a rare dog breed.

The Sealyham Terrier has an unusual appearance with his long broad head and muscular body. His eyes are dark and deep-set. His folded ears lie level with the top of his head. His tail is typically docked.

The double coat is weather-resistant with medium-long fur. The topcoat has hard and wiry fur while the dense undercoat has soft fur. Hair around the face and muzzle is longer than the rest of the body.

Sealies are white but some may have markings on the head and ears that are lemon, tan or black.

The Sealyham is confident and curious. Generally, less rowdy and more mellow than other terriers, he is quite agreeable. He is nicknamed the couch potato of terriers because he can be laidback.

He is social and outgoing but can be reserved around strangers. He has an impressive bark and makes an excellent watchdog.

This terrier has a clever sense of humor and he loves to perform when he has an audience. He has a sense of pride and longs to be treated as a full and equal family member.

Like most terriers, the Sealy likes to dig and bark. He is rambunctious and is a good play companion for older children who are better at handling and interacting with small dogs.

The Sealy might be aggressive towards strange dogs but he gets along well with other dogs and cats in the home especially when they are brought up together.

This small terrier is intelligent and a quick learner. With firm and consistent handling, he responds well to positive training methods like dog treats, rewards, words of praise and play.

To get a well-rounded dog, socialization should start early by exposing the Sealy to various environments, sights, sounds and situations. The terrier should not be allowed to take the position of leader of the pack.

Some Sealies are difficult to housetrain. Crate training, patience and following a regular potty schedule can produce good results.

The Sealy is relatively inactive when indoors but he needs to be walked daily for at least half an hour.

Depending on the dog’s activity level, an adult Sealy can have two meals a day not exceeding two cups of dog food. The best quality dog food provides wholesome and complete nutrition to keep the terrier in good shape.

It is important to monitor the weight of this breed because excessive weight gain can result in back problems. He should also get regular physical exercise to keep him fit.

To prevent tangling, the Sealy’s coat needs to be brushed daily, especially around the head, legs and chest where the fur is longer. Some owners choose hand stripping to maintain the coat’s rough texture while others opt for clipping.

Hand stripping can be time consuming and laborious. Clipping the coat makes it softer although it will result in the dog shedding more than if his coat was hand stripped.

The Sealyham Terrier can adapt to both city and country life. When out in the yard, he should be supervised to ensure he doesn’t walk away to go hunting or chase other animals.

When out and about, this terrier should be kept on a leash because he likes chasing after birds, rabbits, other dogs and cats. He can be aggressive towards larger dogs he doesn’t know and should be controlled to prevent a fight where he can get seriously injured.

The Sealy doesn’t like the heat and should be kept indoors on hot days. It is better to walk or play outside when the temperatures cool down.

It has been observed that this dog breed is targeted by dognappers because he is rare and small enough to steal.

Like other terriers, the Sealy is generally a healthy breed. Because of the low numbers, there is hardly any genetic diversity within the breed.

The known specific concerns that affect this breed’s health include:

Sealyham Terriers have a lifespan of 12 to 14 years.

The Sealyham Terrier is a wonderful dog that is inquisitive and self-assured. He is affectionate, devoted and will delight his family with his clownish ways. Most Sealy owners are never satisfied with just one because this breed brings joy to any household.

The process of acquiring a new dog requires a clear understanding of what is involved in owning one. Our team at All The Small Dog Breeds understand the importance of this and have compiled detailed small dog breed descriptions to make it easier to identify the ideal breed to suit your household.

We recommend adopting from your local animal shelter or registered breeder.