Known as the little lion, the Shih Tzu is a small dog breed that was bred solely to be a companion. This lapdog makes a wonderful addition to any family with his appealing personality. He loves nothing more than meeting and making new friends. 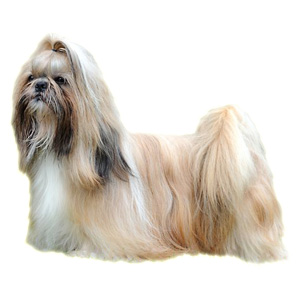 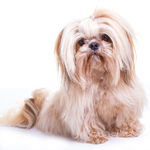 The Shih Tzu is an ancient breed. He is believed to have been developed by Tibetan Monks and gifted to the Chinese royal family.

Some believe that the breed was developed by crossing other dogs with the Lhasa Apso or Pekingese dating back to as early as 8,000 B.C in China.

This small dog was regarded as a valuable companion. He was referred to in writings, paintings and carvings from the Tang Dynasty.

In the 13th century, the Mongolian Emperor Kubla Khan is believed to have kept a few Shih Tzu with trained hunting lions to keep them calm.

Empress T’zu Hsi of China loved this breed so much that she passed a law sentencing anyone to death if they were caught torturing her dogs. Under the supervision of the palace eunuchs, she developed extensive breeding programs for the small dog.

Different royal families competed against each other using secretive breeding practices. This resulted in poor quality dogs being sold in the local markets and the better-quality ones stolen from the palaces and gifted to noble families and foreigners.

A male and female Shih Tzu were brought to England in 1928 by a wife of a general in the British Army. Three Shih Tzu clubs were formed by the 1960s in the United States and in 1969, the breed received official recognition by the American Kennel Club as a toy dog.

The Shih Tzu is a small dog with long fur and a distinctive face. He is sometimes called the Chrysanthemum Dog because of the way his facial hair grows out in all directions.

One unique physical feature is the dog’s undershot bite. His lower jaw is a little wider than the upper jaw causing the upper teeth to bite inside the lower teeth when his mouth is closed.

This small dog breed has a beautiful long coat with silky fur. He sometimes has a white tail and a white-tipped blaze on the forehead.

Bred to be a companion, the Shih Tzu’s only desire is to be with his humans. Though he is happy and outgoing, he will not be interested in hunting, guarding or fetching.

This affectionate dog is happy to live among his human family. He loves receiving attention as well as giving it.

The Shih Tzu is lively and alert. He will bark when strangers come into the home but he will not be aggressive. Soon enough, he will befriend them too.

This small dog is friendly and gets along well with other pets. He is docile and makes a wonderful companion for children. He is however at risk of being carried, dropped or injured when handled by smaller children.

This small dog breed is intelligent but challenging to housebreak. He should not be allowed to roam the homes until completely trained.

Because he is a housedog, crate training is useful to avoid having accidents on the floor or carpet. Some Shih Tzus can be trained to use a litter box to avoid going outside during harsh weather.

Though docile, this breed can benefit from early socialization and training. Without proper socialization he can be timid and proper training will make sure the Shih Tzu is well rounded.

Some owners have enrolled their Shih Tzus in dog sports like obedience, rally and agility.

The Shih Tzu is content to take a short walk every day. He enjoys playing in the yard or in the house.

It is important not to feed this toy dog like other active breeds. As a relatively inactive housedog, an adult Shih Tzu’s daily nutritional needs can be met by a cup of high-quality dry dog food.

This dog’s beautiful coat is high maintenance. To prevent tangles, the fur needs to be brushed and combed regularly. He also requires weekly baths.

During puppyhood, the Shih Tzu’s coat is fluffy and it changes to silky fur when the dog is 10-12 months of age. Brushing during this three-month process can be tedious because the coat seems to mat a lot.

The Shih Tzu is prone to dental problems. Daily brushing of the teeth with a vet-approved toothbrush and toothpaste will help prevent the build-up of tartar.

His face needs to be wiped regularly with a soft warm cloth because he gets messy after meals and has tear stains.

This dog breed is adaptable to any home including an apartment. He is a housedog and should not be left outside or kept in a kennel.

The Shih Tzu has a flat face which makes him sensitive to heat. During the hot summer months, he should be kept in air-conditioned rooms to make sure he doesn’t suffer heatstroke.

The Shih Tzu is fearless and likes to jump from one piece of furniture to the next. Such jumps can cause him to crash forward and suffer an injury. Care should be taken when carrying the dog to make sure he doesn’t jump.

Because of the Shih Tzu’s prominent eyes, he can easily get eye injuries when mishandled.

Generally healthy, this breed may develop health concerns like:

The Shih Tzu is a loveable lapdog. Though he can be trusted with children, he is not ideal for homes with toddlers. Ideal for introverts and people with restricted mobility, this breed will be happy to spend most of his time devoted to spending quality time with his family.

When looking to adopt this breed, note that there is no such dog as an imperial or teacup Shih Tzu.

Adopting a dog is a lifelong commitment. Here at All The Small Dog Breeds, we value responsible dog ownership and we believe it starts with information. Our small dog breed descriptions reveal the ideal four-legged life partner to suit your home and lifestyle.