Developed in Scotland, the Skye Terrier is a versatile small dog breed that tends to be a little shy. He has distinguished good looks with a lush coat and a wonderful personality to boot. 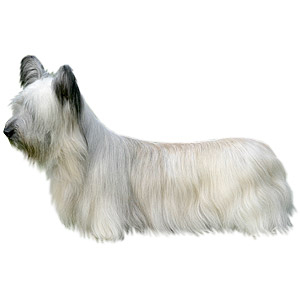 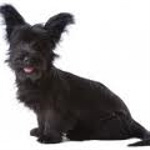 The Skye Terrier was developed more than four centuries ago in Scotland. He was used when hunting for badgers, foxes and otters.

He was built to dig, fit into their burrows and pull them out, with his short strong legs. His double coat protected him from bites, rough brush and thorns.

The Skye Terrier became fashionable after Queen Victoria took a fancy to them and began breeding him. Renowned artist Sr Edwin Landseer featured the Skye in his paintings.

Romach was the first Skye Terrier to be registered by the American Kennel Club in 1887 and the breed was recognised in the same year. Despite his popularity, the Skye is a rare breed.

The Skye is a short breed with a lush coat, long body and feathered ears which can be pricked or dropped.

His parted elegant coat hangs down each side of his body. His undercoat has short, soft and wooly fur while the outer coat has harsh straight hair.

The Skye has a beard and bangs which cover his forehead and eyes. He has longer fur on his chest.

The coat color may have varying shades, black points or markings on the tail, muzzle and ears. Skye puppies sometimes have wide variations until they are fully grown.

Bred to be a hunter, the Skye Terrier is brave, tough and fearless. He will not back down when confronted by a dog of any size.

The breed tends to be naturally shy but can be well rounded with early socialization.

He is good-natured, friendly and devoted to his family.  He is not needy, but he receives respect, attention, and affection. When feeling neglected, he will dig, chew and bark to express himself.

This small dog is reserved around strangers. Cautious around them, the Skye takes his time accepting new people. Visitors to the home should be advised not to be pushy at their first meeting.

Like other terriers, the Skye can be stubborn and have his own mind. Training should incorporate positive reinforcement techniques like praise, play, food rewards and humor.

Training will also require a firm and consistent will to make sure the Skye understands he cannot get away with disobedient behavior.

Early socialization is important for this terrier to prevent timid and aggressive tendencies.

The Skye is alert and makes an excellent watchdog.

This small dog has moderate exercise needs. A daily walk or romp in the yard will keep him happy and less likely to develop destructive behavior.

For indoor play, a bunch of hardy dog toys can help keep him entertained.

The Skye needs at least one cup of high-quality dog food every day. Just like people, how much the dog eats will depend on variables like:

Avoid leaving food in the bowl all the time and get into the recommended feeding routine. This will prevent him from gaining excess weight and forming unhealthy eating habits.

If unsure about how to feed the Skye, consult with an animal nutritionist or his veterinarian for advice on the type of dog food and quantities that will keep the dog fit and healthy.

Grooming sessions should begin as soon as the dog comes home. He needs to get accustomed to being touched and handled.

The Skye’s lush coat needs to be brushed regularly with a comb or pin brush to prevent tangling. Baths are recommended twice a month to clean the coat.

It is necessary to comb the fur before a bath because wet knots are harder to remove and will cause the dog pain and discomfort.

Using a spray bottle to mist the coat before brushing can prevent damage to the fur.

Daily dental hygiene is important to keep the teeth clean, prevent the build-up of tartar and bacteria.

The Skye’s nails do not naturally wear out and monthly trimming is necessary. Overgrown nails can cause slipping and falling when the dog is walking or running.

This terrier is relatively unchanged and the double coat that kept him warm during the harsh Scottish climate means he will be comfortable taking his regular walks in the cold months.

He should however not live outside or in a kennel.

Developed to be a vermin killer, the Skye cannot be trusted with small furry pets. He is also not ideal for homes with younger children because he is too feisty.

When this dog is trained to not bark unnecessarily, he is a good companion in an apartment.

A Skye puppy has bowed front legs and should not be allowed to climb or jump onto furniture. Use dog ramps or stairs to avoid putting unnecessary stress on the legs.

Other health concerns that may arise include:

The Skye Terrier has a lifespan of 12 to 14 years.

The Skye Terrier is perfect for novice dog parents and families with older children who know how to foster healthy relationships with dogs. He gets along well with dogs and cats that he has been raised with. He is a wonderful companion with minimal needs.

Opening up your heart and home for a dog is a big step. Here at All The Small Dog Breeds, we believe that each breed is special and deserving of love and care.

Our small dog breed descriptions allow new and existing dog parents to learn the history and unique breed characteristics to help in choosing the right dog.