One of the small dog breeds with a long history is the Tibetan Spaniel. Resembling a little lion, this dog is sweet, intelligent and attentive. Once a popular gift for boosting diplomatic relations, the Tibbies (as they are nicknamed) are prized companion dogs. 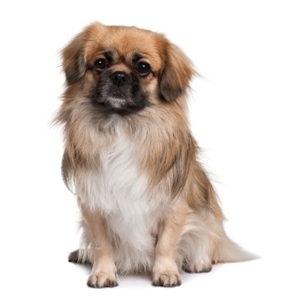 The Tibetan Spaniel is an ancient breed that was bred by Buddhist monks in Tibet and China. Artefacts have been discovered that show them with pushed-in faces and manes that date back centuries.

The monks kept the Spaniels to sound the alarm when people approached the lamasery (Buddhist monastery).

His lionlike appearance made him popular because lions in the Buddhist symbology represent Buddha’s triumph over aggression and violence.

The dogs were gifted to visiting foreign dignitaries from China and Japan where they were interbred with other small dogs to create today’s Tibetan Spaniel.

Despite his name, this dog is not a true spaniel and is related to the Japanese Chin and the Pekingese.

Tibetan villagers and monks continued to breed the Spaniel in a wide range of sizes. The most valuable were the smallest dogs which were bred with dogs originating from China.

The Tibetan Spaniel was introduced to the English market in the late 19th century but was almost made extinct by the events of World War II.

England’s Kennel Club and the American Kennel Club recognized the breed in 1960 and 1984 respectively. Despite his popularity, the Tibetan Spaniel is a rare breed.

The Tibetan Spaniel has a distinct ruff of thick fur around his neck that resembles a lion’s mane. He has a domed head that is smaller than his body.

The muzzle is short and blunt. The dog’s teeth form an underbite or end-to-end bite.

He has V-shaped feathered ears that hang down and his eyes are oval-shaped and set wide apart.

The Pekingese has extra skin around his eyes which helps to distinguish him from the Tibetan Spaniel.

This small dog has slightly bowed front legs with hare-like feet. He has feathering on his tail, ears and toes.

His double coat has silky fur that lies flat on his body. The hair on the face and front of the legs is short and smooth.

The Tibetan Spaniel’s coat comes in many solid and shaded colors including:

The Tibetan Spaniel is affectionate and trusting. He is highly sensitive and responds to his family’s moods and feelings. This makes him an excellent therapy dog.

He is suspicious of strangers and will act aloof towards them. He is however never aggressive but will bark when they approach or something unusual happens.

Even though this small dog loves children and is protective over them, he is not ideal for homes with kids under 6 years. Because of his small size, he needs children who know how to be gentle and respectful.

This dog gets along with other breeds and cats and would be ideal for a multi-dog home.

The Tibetan Spaniel is intelligent and a fast learner. He can be challenging to train because he is an independent thinker who will not always obey, thinking that he knows better.

Early socialization and training are required to get a well-rounded dog. He is willing to please and using positive reinforcement techniques can produce favorable results.

Despite his stubborn nature, the Tibetan is easy to housebreak especially with the aid of a crate.

This small dog breed is active enough to participate and enjoy performance sports like agility.

All dogs need regular exercise but this breed has moderate needs. One or two walks a day or a romp in the yard will be sufficient.

The yard should be fenced and the dog walked on a leash to make sure he doesn’t run off in exploration.

How much the Tibetan eats depends on his age, size, metabolism and activity level. Two meals a day not exceeding 1 cup of high-quality dog food will provide wholesome nutrition.

As a companion animal, dog parents can spoil this dog by giving him too many treats or table scraps. This can lead to poor feeding habits and excessive weight gain.

Weekly brushing can keep this dog’s coat free of dead and loose hair. Expect minimal shedding throughout the year and heavier shed once or twice a year.

Dental hygiene is very important for this dog. Brushing his teeth is best done daily to prevent the build-up of tartar and bacteria.

The dog’s nails don’t naturally wear off and regular clipping is necessary to prevent tearing.

This dog breed is adaptable to living in any type of home in the city or the country. He likes to climb and perch on any high point in the home that allows him to observe everything.

The Tibetan Spaniel is a house dog that loves to spend time with people. He should never live outdoors or in a kennel.

When given little attention or left alone for prolonged periods, this dog will be unhappy and bored. Some distress behaviors may develop like the destruction of items in the home and vocalization.

Generally yappy, it is essential to patiently and consistently teach this dog to stop excessive or unnecessary barking. If the home is under strict noise restrictions, this breed is not ideal.

Generally healthy, the Tibetan Spaniel may develop certain conditions. Some problems may appear after the dog reaches maturity.

The Tibetan Spaniel can live up to 16 years.

The Tibetan Spaniel is an active and alert dog with minimal grooming needs. Affectionate and sensitive, he thrives with plenty of love, attention and human companionship.

It is important to have a clear understanding of a dog breed before bringing him home. Our team at All The Small Dog Breeds understands that every dog is special and requires a responsible dog parent.

We have compiled detailed small dog breed descriptions to make the process easier for new and experienced owners to match up with the right dog for their home.