Also known as the Volpino Italiano, the Volpino is a small dog breed of Spitz type. This versatile dog is an ancient breed that almost went extinct but was revived because of his sweet and friendly nature. 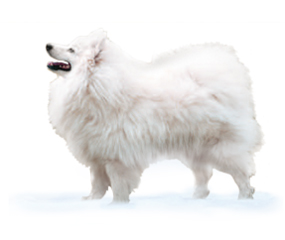 The Volpino was developed in Italy and is related to the Pomeranian and German Spitz. Spitz dogs have foxy faces with pointed snouts and ears.

History claims that this dog was common in Tuscany where he was called Cane di Firenze and Cane del Quirinale. He was used as a guard dog by shepherds and carriers.

From as early as the 15th century, paintings show small Spitz dogs that look like the Volpino. He was a charming companion for Italian royalty.

The famous sculptor Michelangelo and Queen Victoria of the United Kingdom are said to have owned such a dog. He was popular for his size, alertness and he didn’t need much for his nutritional needs.

Even though the first standard of the Volpino was written by the Kennel Club Italiano in 1913, the Italians lost interest in the breed leading to their decline in numbers.

Immigrants took their dogs with them to North America where they lived as family pets.

The Federation Cynologique International recognised the Volpino in 1956.

Close to extinction, fanciers made an effort to revive the breed in the 1960s. The dog is still rare with most of them living in Italy. The United Kennel Club officially recognised the breed in 2006.

The Volpino has a square small body and is often mistaken for a Pomeranian or toy American Eskimo. The Volpino is slightly larger than the Pomeranian.

He has a sharp straight muzzle and wedge-shaped head. His black nose doesn’t pass the front of his lips and lines up with the muzzle. His round eyes are dark brown.

This dog is double-coated with long fur that is usually harsh to the touch and stands off the body. He appears to be wrapped in a muff around the neck.

The hair on his tail is long and forms a fringe. He has thick friends on his back legs called skirts.

The coat comes in the following colors:

The Volpino is vivacious and playful. He is a good companion for children and he loves to curl up next to people he has created a bond with.

He is loyal, protective and alert, making him an excellent guard dog. He might be standoffish to strangers and will bark when he meets new people or animals.

The Volpino gets along with children but is better suited for homes with older children. Because of his size, smaller children may accidentally injure the dog.

When raised together, the Volpino gets along with other dogs and cats. full of character and mischief, he will enjoy entertaining and playing with them.

This small dog is intelligent with a sense of independence. He is eager to please and trainable.

He has the potential to excel at dog sports like agility, rally and nose work but can be stubborn and cheeky.

Harsh criticism can lead to resentment and the Volpino can become disinterested in further training.

The Volpino is generally energetic and needs plenty of daily exercise. He also needs mental stimulation like interactive games and puzzles.

When properly worn out, he is happy to play the role of a lapdog.

The Volpino requires a diet that is formulated for his age, size, metabolism and level of activity. Fully grown, this dog’s nutrition should be tailored into two meals a day amounting to ¼ to ½ cup of high-quality dog food.

Although The Volpino is an average shedder, his double coat benefits from regular brushing to prevent the coat from matting especially around the neck ruff.

For hygienic reasons, trimming the longer fur around the back limbs and tail is recommended.

Paw care is essential to make sure he is carrying dirt and debris between his toes. His nails should be trimmed at least once a month to keep them short.

Daily dental hygiene using a dog toothbrush and toothpaste will prevent the build-up of plaque and bacteria and prevent gum disease and bad breath.

The best time to examine the dog for skin infections and parasites is during the grooming process. Any irregularities should be referred to the dog’s vet.

The Volpino can be a barker and should be trained to do so only when necessary. A well rounded Volpino is a good companion for apartment life but he will also appreciate a home with lots of space.

This breed needs a lot of attention and should not be left alone for long periods. When bored, or not stimulated enough he may suffer separation anxiety and manifest unwanted behaviors like nuisance barking.

As a prankster, this dog can come up with ways to keep himself entertained. Interactive dog toys that he can play on his own or with others can help him put that muscle to work.

Usually a healthy breed, the Volpino is predisposed to certain health risks including:

The life expectancy of the Volpino is 14 to 16 years.

The Volpino is an active small dog breed with high demands for exercise and plenty of attention. This happy dog likes to play games and take long walks. He is loyal and makes an excellent family dog.

Getting a dog for your family is a fulfilling adventure. Sometimes you would like a unique breed and here at All The Small Dog Breeds, we have information on these rare pups.

Our small dog breed descriptions guide you to find the right breed that suits your household and lifestyle. We recommend adopting from your local animal shelter or reputable breeder.