The Welsh Terrier is a spunky small dog breed with a contagious zest for life. Full of character, this terrier has an appealing personality but is fairly uncommon. Living with this breed is a hugely rewarding experience. 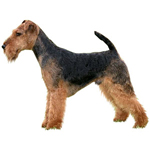 Fondly called the Welshie, this small dog doesn’t have a clear origin story. Ancient paintings and documents have shown that he might be one of the old terrier breeds.

What is known is that during the 19th century he was called the Black and Tan Wire Haired Terrier or Old English Terrier.

His purpose was to hunt small game like rodents, foxes, otters and badgers in Wales, United Kingdom.

In 1885, the Kennel Club of England categorized the Old English Terrier as a Welsh Terrier.

This breed was exported to the United States three years later and his popularity grew. He has retained many of the characteristics that he had centuries ago.

Though relatively rare, this charming dog has found his way into famous people’s hearts and homes like former US President John F. Kennedy and Clement Attlee, former prime minister of the United Kingdom.

The Welshie is a sturdy compact dog that looks like a small Airedale.

The dog’s weight is always in proportion to his height and bone density.

He has a rectangular shaped body and an elongated face with amazing long whiskers and a beard.

This terrier is double coated. His outer coat is hard and wiry while his undercoat is soft and short. The color of the coat is always tan and black with variable shading.

The Welshie is a true terrier. He loves to bark, dig and has a high prey drive. He has a happy disposition and a zest for life.

He is friendly, cheerful and affectionate with all his family members. Surprisingly tough, the energetic Welshie loves kids and makes a terrific playmate.

With proper socialization, this breed gets along with other dogs in the home. He is however not recommended for a household with small animals because of his strong prey drive.

The Welsh Terrier is intelligent and excels in dog sports like agility, tracking, flyball, earthdog and obedience.

He is a fast learner and can be found working as a therapy, and search and rescue dog. With frequent intellectual stimulation, he can be easily trained.

This dog is an independent breed and not for fainthearted. Do not expect instant obedience but with repeated effort, using positive reinforcement techniques, he will come to understand who is in charge.

He is a problem solver. He should not be underestimated, especially when he is left alone with pent up energy. A bored restless Welshie can get into all sorts of mischief.

Crate training is beneficial to avoid accidents in the home. He should however not be kept in the crate for too long because he is not meant to live like that.

The Welsh Terrier is a high energy dog and needs plenty of physical and mental stimulation. At least an hour a day of exercise is sufficient.

This dog is an excellent jogging companion but will also be roughhousing in the home to burn off steam.

Like other dogs, the Welshie should eat commensurate with his age, size, body build, metabolism and level of activity.

His food should be measured onto his food bowl only at mealtimes to avoid overeating. An adult Welshie can eat an amount of ¾ to 1 cup of high-quality dog food twice a day.

Fresh clean drinking water should always be made available.

The Welshie does not shed but requires at least once a week of brushing to prevent matting and hand stripping several times a year. This will remove loose or dead hair and keep the coat in good condition.

It is important to clip the dog’s nails once or twice a month because they don’t naturally wear down. Long nails can cause the dog to slip and fall when running.

Oral hygiene is crucial with a dog toothbrush and toothpaste formulated specifically for canines. Daily brushing will reduce the bacteria in his mouth and prevent the build-up of plaque.

The grooming process offers an opportunity to examine the dog and check for any signs of disease or infection. Any sores, rashes, redness, tenderness or inflammation are signs of potential health problems.

The Welsh Terrier loves to play inside the home. He can be quite rambunctious, flying off furniture at any moment because he enjoys being in high altitudes.

This breed was developed to be a watchdog and tends to bark when he notices something suspicious. This can be a problem for apartment living. He is better suited for a home with a fenced yard.

As a true terrier, this dog likes to dig. He can easily fill the lawn with holes. It is easier to assign a space for this activity than to completely stop this habit.

Even though this hardy breed loves the outdoors and has a double coat, he is better off living indoors with his family.

He is not prone to separation anxiety but needs interactive dog toys to keep him busy so he doesn’t get bored and destructive.

This medium-sized dog is normally healthy with a durable physique but he has a genetic predisposition to:

The Welsh Terrier has a life expectancy of 12 to 15 years.

If you are looking for a hypoallergenic furry friend with the fun characteristics of a terrier, the Welshie is your dog. This free thinker is a big dog in a small body and is not recommended for first-time dog parents. Devoted and affectionate, he is the perfect companion for an active household.

Here at All The Small Dog Breeds we understand that adopting a dog is life-changing and not all good breeds come in big packages. Our small dog breed descriptions act as guidelines to lining you up with your furry friend.