The Yorkshire Terrier is a small dog breed that is popular for his elegant physical appearance, endearing personality and size. Nicknamed the Yorkie, this terrier is affectionate, loyal and always ready for an adventure. 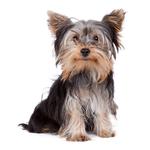 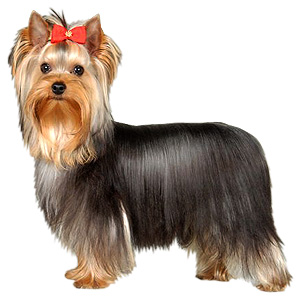 This terrier comes from Yorkshire, England. In the 19th century during the Industrial Revolution, Scottish immigrants working blue-collar jobs came to England with a dog called Clydesdale Terrier or Paisley Terrier.

Much larger than the modern-day Yorkie, the Clydesdale Terriers worked as ratters in the textile mills.

The Clydesdale was crossed with the English Black, Tan Toy Terrier, Skye Terrier and Waterside Terrier to develop the Yorkie.

First shown as a broken-haired Scotch Terrier, the breed was named the Yorkshire Terrier in 1870 after its place of development.

The breed was officially registered in the British Kennel Club book four years later. In 1898, the first Yorkshire Terrier breed club was formed, and in the early years, the Yorkie was shown in different weight classes, however eventually, exhibitors decided on the one class that we know today.

The Yorkshire Terrier has a single coat with long, silky and straight hair. Show Yorkies have longer fur that reaches the floor.

Yorkie puppies are born with a black coat. Before turning a year old, some puppies’ coats start to lighten and turn gray. Other puppies develop blue and tan coats after a year old.

The hair at the back of the head to the tail is usually dark steel blue and has a sheen visible in the sunlight. The fur on the head has a golden hue with tan hairs that don’t extend past the ears.

The hair that falls over the face is long while that on the base of the ears and muzzle is slightly darker in color. The tan hairs are not mixed in with the black hairs.

Even though the Yorkie has tan legs, this color doesn’t extend above his elbow.

All Yorkies coats become lighter with age. The coat color is also affected by hormonal changes like when the female is in estrus.

The Yorkie is one of the smallest dog breeds. An adult Yorkie ideally weighs no more than 6 pounds (3.2kg) and measures 8 to 9 inches (20 to 23cm) at the shoulder.

Teacup Yorkies are much smaller and prone to genetic disorders with higher health risks.

The Yorkie displays a range of personalities. He can be smart, self-assured, adventurous, cuddly, perky, mischievous and outgoing.

This breed tends to be yappy and believes itself to be a big dog. He will easily get into trouble in his search for adventure.

This dog can easily push his limits and needs to begin training from puppyhood.

The Yorkie loves kids but is better suited for homes with older children because of his delicate structure and small size.

Receptive to training, this small dog loves to perform tricks and excels in agility and obedience trials.

It can be challenging to housebreak the Yorkie. Even though their messes are small and easy to clean, owners should be strict on training the dog to do his business in the appropriate place.

The Yorkie benefits from early socialization. By exposing him to different situations, people, animals and experiences, he has a much better chance of being a well-rounded dog.

The Yorkshire Terrier has low exercise needs. A walk or romp in the yard per day will keep him fit.

There’s nothing more fun for a Yorkie than a squeaky dog toy. Playing fetch is a wonderful form of physical exercise.

It is important to get durable dog toys that are soft on his mouth and should be examined frequently and throw out any that have been damaged.

This small dog has a sensitive stomach and can be a picky eater. His meal portions are determined by his age, size, build, metabolism and activity level.

An adult Yorkie can thrive on two meals a day measuring ½ to ¾ cup of specially formulated dog food that provides complete and wholesome nutrition.

He should not always have a full bowl of food available to him or spoilt with table scraps and dog treats. Obesity is a real possibility for this breed and can be prevented.

The Yorkie is a low shedding breed. His long-haired coat should be gently brushed every day to prevent matting and keep the coat clean. The fur around his anus should be kept short.

To get that adorable topknot, the hair can be collected on the top of his head and fastened with a band before adding any hair accessories.

A weekly bath using a dog shampoo and conditioner will keep the coat beautiful and shiny.

Regular brushing of the teeth is crucial for this breed because he is prone to severe dental disease. It is recommended to use toothpaste that is formulated specifically for dogs.

It might be necessary to take the Yorkie to the vet for professional teeth cleaning.

This small terrier is adaptable to living in any size of home whether in the country or the city, provided he is trained to bark only when necessary.

The Yorkie doesn’t like to be left alone and exhibits separation anxiety. He is better off living in a home with another Yorkie or two.

Ideally a housedog, the Yorkie doesn’t tolerate extreme weather conditions. Some owners train their dogs to use toilet pads or litter boxes to avoid going outside when it’s too hot or cold.

Generally a healthy breed, the Yorkie is prone to developing health concerns:

The Yorkie has a life expectancy of 12 to 15 years.

The Yorkshire Terrier is an attractive dog that is small enough to carry in a dog purse. Active and fond of attention, this dog is adaptable but not suitable for homes with toddlers. This dog will thrive in any home that offers love and attention with limited exercise and daily interaction.

One of the most rewarding life experiences is adopting a dog. Here at All The Small Dog Breeds, we try to make the process a little easier and less daunting.

Our small dog breed descriptions provide details about our small furry friends that allow you to make an informed decision and be prepared for adoption.

We recommend adopting from your local shelter or reputable breeder.